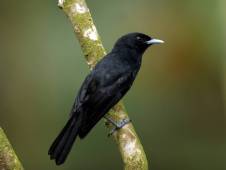 The Alliance for Zero Extinction (AZE), of which BirdLife is a founding member, aims to identify sites that hold the last remaining populations of highly threatened species. Such sites are among the most urgent priorities for appropriate protection and conservation action. For birds, AZE sites can be viewed as a critical subset of Important Bird Areas (IBAs)—the last line of defence in preventing imminent avian extinction.

The Alliance for Zero Extinction (AZE) is a joint initiative of 88 biodiversity conservation organisations, including BirdLife International and a number of national BirdLife Partners. Its aim is to identify and safeguard sites holding the last remaining population of highly threatened species, acknowledged as Endangered or Critically Endangered on the IUCN Red List. To date, AZE sites have been identified for 920 a number of taxonomic groups, including mammals, birds, reptiles (crocodilians, iguanas, turtles, and tortoises), amphibians, conifers, and reef-building corals.

Endangerment: An AZE site must contain at least one Endangered (EN) or Critically Endangered (CR) species, as listed on the IUCN Red List.

Irreplaceability: An AZE site should only be designated if it is the sole area where an EN or CR species occurs or if it contains the overwhelming proportion of the known resident population of the EN or CR species for at least one life history segment (e.g., breeding or wintering).

Discreteness: The area must have a definable boundary within which the character of habitats, biological communities, and/or management issues have more in common with each other than they do with those in adjacent areas (e.g., a single lake, mountaintop, or forest fragment).

For example, the Society Islands of Tahiti are recognized as an AZE because of the endemic Critically Endangered Tahiti Monarch, pictured above, of which there are fewer than 50 individuals. This approach alone is, of course, not sufficient to prevent all extinctions. Many highly imperilled species are not confined to a single site. For example, Asia and Africa’s Gyps vultures have experienced a catastrophic decline over the last three decades but continue to have very broad ranges. For example, Africa’s Critically Endangered Rüppell’s Vulture Gyps rueppelli has a range of 14.1 million km2, but only 22,000 individuals and Asia’s Critically Endangered Slender-billed Vulture Gyps tenuirostris has a range of 2.5 million km2 and a very small population of less than 2,500 individuals. Furthermore, effective conservation needs to move beyond site-specific strategies and address threats to biodiversity and ecological processes in the wider landscape. Despite this, many species are now so threatened that without immediate, targeted action at key locations they are likely to disappear forever. AZEs represent centres of imminent extinction and are urgent and compelling priorities for conservation action.

As of the latest update (2010) of the AZE inventory, a total of 588 AZEs have been identified. These sites represent the last remaining populations of some 920 ‘trigger’ species, including 200 bird species. Twenty-one percent of AZEs are triggered by birds alone, 4% are triggered by both birds and other taxa, and around 25% are triggered by other taxa but also qualify as IBAs (for the less threatened or more widespread bird species that occur in them). Despite the obvious importance of AZE sites, only 22% are fully protected, whilst 27% are partially protected, and 51% remain unprotected. By drawing global attention to these critical sites, it is hoped that the AZE initiative can help secure the future of some the world’s most threatened species.

Recommended Citation:
BirdLife International (2017) Some IBAs hold the last populations of highly threatened bird species and are an urgent priority. Downloaded from http://www.birdlife.org on 19/08/2022

Key message: IBAs have been identified for most threatened species and for many others of conservation concern
Case studies