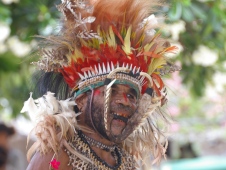 Across the world, tribal peoples used the plumes of the birds they hunted to decorate themselves and feathers have been a sign of status and personal quality in western societies, too.

Feathers have always been part of human self-adornment, betokening status, wealth, vitality, ardour and defiance (Diamond 1986). Across the world, tribal peoples had used the most colourful and extravagant plumes of the birds they hunted to decorate themselves. Zulus once wore turaco feathers as headdresses. The King of Swaziland and traditional Masai men still do. In West Africa, a porcupine quill and red flight feather from Bannerman’s Turaco Tauraco bannermani in a man’s black hat indicate his position as a traditional council member. In the Palas valley in northern Pakistan, people wear the colourful plumes of the near-endemic Western Tragopan Tragopan melanocephalus in their caps. In Borneo the tail-feathers of the largest hornbills are used in ceremonial dances and rituals. In New Guinea the birds of paradise were (and again still are) the chief targets, and dried skins were used in trade as far east as mainland South-East Asia and as long ago as 3000 BC; but cassowaries are used more completely—their feathers used in ceremonial headdresses, their bare quills carved into nose-pins and ear-rings, their leg-bones fashioned into implements and their sharp claws fitted to arrow-tips (on top of all this, they furnish a spectacular amount of food). In New Caledonia, Kagu Rhynochetos jubatus feathers were used in the war headdresses of chiefs, and their calls mimicked in war-dances. Polynesians trapped Red-tailed Tropicbird Phaethon rubricauda on the nest, plucked their long red streamers to wear in their hair or nose, and—with admirable self-restraint and forethought—let the birds go. Rulers in Hawaii made capes out of now-extinct drepanid finches, and probably contributed heavily to their demise: the ceremonial cloak made for Kamehameha, the first king of all the islands, is composed—to the most exacting of standards and to memorised incantatory rituals—of nearly half a million yellow feathers from an estimated 80,000 birds belonging to one species, the Hawaiian Mamo Drepanis pacifica. In North America the feathers of the Bald Eagle Haliaeetus leucocephalus formed the almost legendary headdresses of native Indians, but they also made necklaces and tiaras from the feathers of Red-headed Woodpecker Melanerpes erythrocephalus, Callipepla quails and hummingbirds, with one surviving cape being made entirely of the red head-plumes of Acorn Woodpeckers M. formicivorus, several thousands of which would have been needed for the purpose. In Central America, the extraordinary blue-green iridescent snaking back-plumes of the Resplendent Quetzal Pharomacrus mocinno were woven into royal gowns; besides quetzal plumes, the gown belonging to the Aztec king Moctezuma had many hundreds of trochilid feathers, interspersed with tiny platelets of gold. In South America, many kinds of exquisite feathers were used by native tribes, notably from cotingas, hummingbirds, toucans and parrots: certain tribes made headdresses from the wings of the Hyacinth Macaw Anodorhynchus hyacinthinus, and the Emperors of Brazil had cloaks made from Channel-billed Toucan Ramphastos vitellinus plumes and mantles made of Guianan Cock-of-the-rock Rupicola rupicola feathers.

Feathers have been a sign of status and personal quality in western societies, too. Three white plumes of the Ostrich Struthio camelus have, for example, been the heraldic badge of the Prince of Wales since the fourteenth century. Doubtless cued by this powerful association, ostrich feathers in the hat of the seventeenth-century cavalier proclaimed his status as a physically and sexually dominant male and, as a twentieth-century equivalent, Jimi Hendrix wore a peacock-feather waistcoat. White aigrettes in the coiffure of an eighteenth-century courtesan betokened an exotic sensuality and, again as twentieth-century equivalents, the showgirls of Paris and Las Vegas perform for men in shimmering plumes and headdresses (Collar et al. 2007).

Recommended Citation:
BirdLife International (2008) Feathers have always been used by humans as decoration and status symbols. Downloaded from http://www.birdlife.org on 02/02/2023