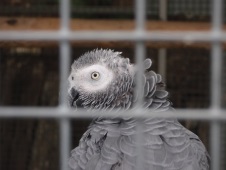 The Grey Parrot Psittacus erithacus and Timneh Parrot P. timneh exemplify the problem of overexploitation. These are conspicuous and charismatic species, and their popularity as pets means that they are heavily traded and suffer high trapping pressure. Trade data for these two species, collected by the Convention on International Trade in Endangered Species of Wild Fauna and Flora (CITES) indicate that during 1994–2003, over 359,000 wild-caught individuals (the majority being Grey Parrots) were exported from range states. Numbers recorded in international trade are thought to represent only a proportion of the total numbers extracted from the wild when pre-export mortality and widespread illegal, unreported trade is taken into account.

There has been a significant decline in the wild populations of both Grey Parrot and Timneh Parrots across Africa. Trapping for the wild bird trade has been implicated as a major cause, with habitat loss also contributing in West and East Africa. Both species are highly gregarious, feeding in small groups of up to 30 birds, and nest in tree cavities 10-30m above the ground (Juniper and Par 1998). This gregarious behavior makes them particularly vulnerable to trappings. Indeed, Grey Parrot is the third most internationally-traded, wild-harvested bird, with their populations in decline in 14 out of its 18 range countries. The 2006 CITES Review of Significant Trade showed that exports from 1994 to 2003 represented a harvest of potentially up to 21% of the wild population annually. In addition, between 1990-2000, forest loss has been estimated to be 31% and 26% in Cote d’Ivoire and Nigeria respectively. In Cameroon, the legal trade in Grey Parrots based on the current annual export quota is worth around US$3 million.

Trade-associated declines are due to: over-harvesting arising from use of poorly-founded quotas; poor management and regulation of trade, including exceeded quotas, due to limited capacity and resources of authorities; high pre-export mortality from poor handling (30-66% of birds caught; Fotso 1998, McGowan 2011); and a large illegal trade due to weak enforcement.

In 2012, BirdLife recognised Grey Parrot and Timneh Parrot as separate species and listed both as Vulnerable on the IUCN Red List because of the extent of the annual harvest for international trade and the rate of ongoing habitat loss in the region.

Recommended Citation:
BirdLife International (2013) Trade in Africa’s Grey Parrots and Timneh Parrots is currently not sustainable. Downloaded from http://www.birdlife.org on 06/12/2022