Many bird species are close to extinction 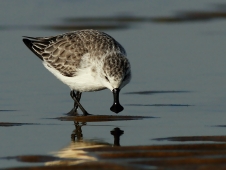 Over 1,480 bird species are considered globally threatened, because they have small and declining populations or ranges. Of these, 223 are Critically Endangered and face an extremely high risk of extinction in the immediate future. Threatened birds are found throughout the world, but are concentrated in the tropics and especially in forests. Population declines may be quick and catastrophic, but even small increases in mortality can threaten the survival of some species.

More than one in eight of the world's birds faces extinction

A significant proportion of the world’s biodiversity now faces extinction. It is not yet possible to quantify exactly how many species are at risk, because we have not even named about 90% of all species on Earth, let alone assessed their status. However, a few groups of organisms are well known, and their threat status has been comprehensively assessed using the criteria of the IUCN Red List, developed over many years as a scientifically objective way of assessing extinction risk. BirdLife International is the official Red List Authority for birds, tasked with evaluating the status of the world's entire avifauna and keeping these data up-to-date. As of 2020, 1,481 bird species (13.5% of the total extant data sufficient species, or more than one in eight) are globally threatened with extinction because of their small and declining populations or ranges. Of these, 223 species are Critically Endangered, meaning that they face an extremely high risk of extinction in the immediate future (

). At the regional level, BirdLife’s assessment of the conservation status of Europe’s birds in 2004, showed that 43% of the continent’s avifauna was in an unfavourable condition—a deterioration from 38% a decade before (

Threatened species are found throughout the world

). While many are restricted to single countries, some range across large numbers of states—over eighty in the case of Egyptian Vulture. Threatened species are found on both the largest land-masses and on some of the smallest islands—the entire global population of the threatened Ascension Frigatebird breeds on Boatswainbird Islet, a 1 km2 flat-topped rock off Ascension Island in the Atlantic Ocean. Oceanic islands have disproportionately large numbers of threatened birds because their bird species are particularly susceptible to human influence (

). Among seabirds, there are particularly high densities of threatened species in the international waters of the southern oceans, notably around New Zealand (

Although threatened birds are found from polar regions to the equator, they are concentrated in the tropics, largely in forests (

). Regions such as the tropical Andes, the Atlantic Forest of Brazil and the archipelagos of South-East Asia particularly stand out, with Brazil and Indonesia the two countries in the world with the highest numbers of threatened birds (122 and 119 species respectively) (

Declines can be quick and catastrophic

Population declines of threatened species are not always slow and gradual, in line with progressive habitat loss or exploitation—on occasions, they can be extremely rapid and dramatic. Such precipitous declines can affect even formerly abundant species (

Even small increases in mortality can threaten the survival of species

For slow-breeding species, even quite small increases in mortality among adults can lead to significant population declines (

). For these species, the underlying causes are likely to have been operating for a while by the time declines are detected, and, even if remedial action is taken immediately, recoveries may not be seen for many years.