Human actions are putting pressure on species, sites and habitats 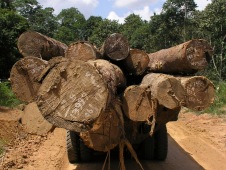 Humans are responsible for most of the threats to birds. Expanding and intensifying agriculture and forestry, the biggest problems, cause habitat destruction, degradation and fragmentation. Fisheries degrade the marine environment and kill seabirds through accidental bycatch. The spread of invasive alien species, pollution and over-exploitation of wild birds are also major threats. In the long term, human-induced climate change may be the most serious threat of all.

). Habitat destruction renders areas entirely or almost entirely unsuitable for their original fauna and flora. Agricultural and forestry activities, and large-scale infrastructure development, can all have this effect (

). Habitat degradation is much harder to define and its impacts often less easy to discern but they can undoubtedly be very important. Intensification of agriculture and fisheries, slash-and-burn crop cultivation, logging of hardwoods in tropical forests, nutrient enrichment of fresh- and saltwaters and the spread of invasive species are just some of the factors that can alter habitats, sometimes drastically, and affect their ability to support populations of particular species. Of all the ways that humans can affect habitat, fire can have some of the most far-reachng consequences. Fire is a natural phenomenon in many habitats but since pre-history humans have drastically altered the fire regime wherever they have spread, often with major impacts on local biodiversity (

Fragmentation—the division of formerly contiguous areas of natural or semi-natural habitat into smaller, more or less isolated patches—affects the ability of habitats to support populations of constituent species. This is because the ecological characteristics of small fragments of a habitat are different from those of larger areas, principally owing to so-called ‘edge effects’ and to the inability of small areas to support viable populations of species that have large territories or home ranges. For these reasons, small fragments of a habitat almost invariably support fewer species than large areas (

Increased human activity at sea has given rise to multiple threats to seabirds. The presence of humans alone is cause for stress amongst the species which nest in colonies (

), and can severely impact the future and survival of offspring. Out at sea, shipping causes global disturbances, within and without the boundaries of protected areas (

). Many species are disturbed or killed by ships and fisheries, and the broader impact of these encounters are not well known. As human presence at sea proliferates, our limited knowledge on seabird behaviour points to the need for more attention to be directed at this issue.

Birds are affected by a multitude of stressors which can seriously affect their chances of survival and those of their offspring. For many species, the main pressures they face are caused by humans, and include overexploitation, habitat destruction and hunting. In instances where threatened species are already affected by human activity, natural threats can be the breaking point for their populations’ recovery. Natural disasters such as tsunamis can be particularly devastating for small island seabird colonies (