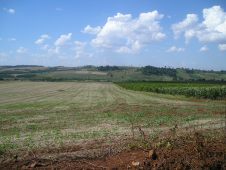 Farmland has replaced much of Paraguay’s Atlantic Forest, © Oscar Rodas

Recent research in Paraguay has revealed a dramatic decline in the country’s Atlantic Forest since the early 1970s. Landsat satellite images reveal that nearly two thirds of the forest cover has been lost since 1973, leaving many of the region’s protected areas isolated and vulnerable to further degradation and deforestation.

High rates of habitat destruction constitute the principal threat to biological diversity (Diamond 1989). The steady fragmentation of natural landscapes has been underway for many centuries, however, the pace of habitat destruction has accelerated and now threatens some of the most species-rich regions on earth such as South America’s Atlantic Forest.

Home to an estimated 20,000 vascular plant species, 40 percent of which are endemic, the Atlantic Forest of south-east Brazil, north-east Argentina and eastern Paraguay is one of the most biologically diverse forests in the world. It is also amongst the most threatened—once covering approximately 1.7 million km2, it has been reduced to less than 7.4 percent of its original area. The remaining primary forest is now confined to scattered patches, few of which are larger than 1000 ha (10 km2) (Terborgh 1992).

Although only a small percentage of the Atlantic Forest Ecoregion occurs in Paraguay, the area is disproportionately rich in biodiversity, hosting around 10,000 plant species. Until the 1940s, the forests of eastern Paraguay remained largely intact, subject to mostly small-scale, selective logging. Since this time, however, extensive deforestation has taken place with recent research revealing a dramatic decline in the extent of forest cover since the early 1970s (Huang et al. 2007).

Using Landsat satellite images, researchers mapped the changes in forest cover within the Paraguayan Atlantic Forest Ecoregion (PAFE) between 1989 and 2000, and estimated the forest extent in 1973 (Huang et al. 2007). The results indicate that in the early 1970s forest still covered 73.4 percent of the PAFE, however by 1989 only 40.7 percent was left forested and by 2000 just 24.9 percent remained. The satellite images reveal that the deforestation has been driven by the competing actions of recent settlers, keen to acquire small patches of forest for farmland, and by private land owners, who have converted large blocks of forest for agriculture, often motivated by a fear that if left forested the land would be expropriated by settlers.

Deforestation has left many of Paraguay's protected areas as isolated ecological ‘islands’ within a highly modified and degraded landscape. These remnant habitat patches may be too small and too isolated to adequately safeguard complete biological communities. The protected areas have also been left extremely vulnerable to further exploitation. For example, in Indonesia, rapid deforestation surrounding protected areas has frequently been a precursor to logging encroachment within reserve boundaries (Curran et al. 2004). Paraguay’s protected areas support numerous threatened species, including the Endangered Black-fronted Piping-Guan Pipile jacutinga and Marsh Seedeater Sporophila palustris, and it is vital that actions are taken that adequately safeguard them.

Recommended Citation:
BirdLife International (2008) The rapid loss of Paraguay's Atlantic Forest and the status of protected areas. Downloaded from http://www.birdlife.org on 03/02/2023

Key message: Many species depend on forests, which are being lost at an alarming rate
Case studies