The illegal parrot trade remains a problem in Latin America 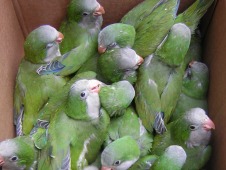 In Latin America thousands of wild parrots are illegally caught and traded every year despite national laws and international trade agreements. High levels of exploitation are causing local population declines in the most sought-after species and are contributing to the declines of already globally threatened species.

The sale of wild-caught parrots still occurs in the Americas, often in contravention of the Convention on International Trade in Endangered Species (CITES) and national laws that ban unauthorised trade in wild animals. A recent study of pet markets in Santa Cruz, Bolivia found that over 22,000 individuals of 31 parrot species, the vast majority of which (94%) were wild-caught, were illegally traded every year under Bolivian law. This level of trade is comparable in other Bolivian cities, and similarly large numbers of wild-caught birds are traded illegally in Mexico, with trappers estimated to capture 65,000–78,500 parrots every year. The trade in wild-sourced parrots is also common in Nicaragua and Brazil (Herrera and Hennessey 2007, Cantú–Guzmán et al. 2008).

One of the reasons why the trade in wild parrots continues is that it is very profitable, with particularly beautiful or rare species selling for up to US$1,000 or more (Herrera and Hennessey 2007). The overexploitation of parrots has significantly affected wild populations however, with the four Mexican species in highest demand (Orange-fronted Parakeet Aratinga canicularis, White-fronted Parrot Amazona albifrons, Lilac-crowned Parrot Amazona finschi and Mexican Parrotlet Forpus cyanopygius) estimated to have declined by 20–30% over the last 10 years (Cantú–Guzmán et al. 2008). Critically Endangered Blue-throated Macaw Ara glaucogularis, a species endemic to Bolivia, also attributes its threatened status to dramatic population declines owing to illegal trapping and trade (Herrera and Hennessey 2007). As many as 75% of parrots taken from the wild may die from stress, disease, rough handling, crushing, asphyxiation or dehydration during capture and transport before even reaching the consumer. In Mexico alone, the number of wild-captured parrots dying in transit may be as high as 50,000–60,500 every year, a level of mortality which is clearly unsustainable (Cantú–Guzmán et al. 2008).

Although many birds are traded within the country of origin, international parrot smuggling is very common. The parrot trade in Mexico is largely driven by the demand for exotic birds in the US, where an estimated 4–14% of Mexican wild-captured parrots (up to 9,400 birds) are smuggled each year. Of the ten species most commonly traded to the US, three are classified on the 2008 IUCN Red List as Endangered (Yellow-headed Parrot Amazona oratrix, Red-crowned Parrot Amazona viridigenalis and Thick-billed Parrot Rhynchopsitta pachyrhyncha) and a further two are classified as Vulnerable (Lilac-crowned Parrot and Military Macaw Ara militaris) (Cantú–Guzmán et al. 2008). Threatened species such as Critically Endangered Lear’s Macaw Anodorhynchus leari, Endangered Red-fronted Macaw Ara rubrogenys, Endangered Hyacinth Macaw Anodorhynchus hyacinthus and Military Macaw are frequently transported across Bolivia from Brazil to be sold in Peru. Here, authorised wildlife trading routes for a limited number of species appear to act as a channel for smuggling threatened species into Europe (Herrera and Hennessey 2007, BirdLife International 2008). The trade in wild-caught parrots appears unsustainable at current levels, but would doubtless increase further if the trade were legalised and unrestricted. With increased enforcement and awareness of wildlife trade legislation, the capture and trade in threatened wild species could be reduced to sustainable levels (Wright et al. 2001).