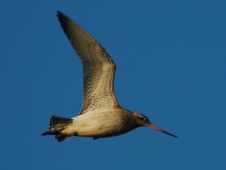 The Bar-tailed Godwit Limosa lapponica undertakes one of the avian world’s most extraordinary migratory journeys. Recent research reveals that some individuals from the East Asia/Australasia Flyway population made a nonstop flight of over 11,000 km, the longest continuous journey that has ever been recorded for a landbird. 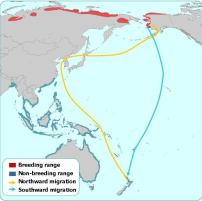 The East Asia/Australasia Flyway contains two Bar-tailed Godwit subspecies: L. l. menzbieri, which nests in north-eastern Siberia and spends the northern winter in South-east Asia and western Australia, and L. l. baueri, which breeds in western Alaska and migrates to New Zealand and south-east Australia for the non-breeding season. The flyway population is estimated at 325,000, comprising roughly 170,000 menzbieri and 155,000 baueri (Delany and Scott 2006, Bamford et al. 2008).

Ornithologists have long suspected that the Bar-tailed Godwit was capable of making an immense journey in a single haul (Gill et al. 2005). However, the true scale of their migratory feats has only recently been confirmed. Researchers from the Pacific Shorebird Migration Project, a joint initiative between the U.S. Geological Survey (USGS) and PRBO Conservation Science, used satellite telemetry to follow the birds’ migration. Individuals of the baueri race were fitted with small transmitter whilst on the ‘wintering’ grounds in New Zealand (Gill et al. 2009).

The birds began their northward migration in mid-March, typically completing the journey in two stages. First, the godwits follow the west Pacific Rim to the Yellow Sea, which lies between mainland China and the Korean peninsula. This leg, of over 10,000 km, is completed in a single flight and takes between six and eight days. The North Yellow Sea, particularly the area around the Yalu Jiang Nature Reserve, is an extremely important staging site, with almost the entire baueri race believed to pass through the area each spring. The birds remain here for several weeks before continuing on to their Alaskan breeding grounds, where they stay for much of June and July. In August, the birds ‘bulk up’ at coastal staging sites such as Kuskokwim Shoals off the mouth of the Kuskokwim River. Immediately prior to departure, their fat reserves constitute over half their body weight, whilst their gizzards and intestines, which are not needed during flight, shrink to almost nothing (Piersma et al. 1998). The birds depart Alaska in late August, embarking on a remarkable non-stop flight directly across the central Pacific Ocean. Aided by strong tailwinds, the birds average 56 km per hour and can complete the 11,000 km journey in just over eight days. With a total round-trip of 29,000 km it is likely that a typical Bar-tailed Godwit of the baueri race will fly more than 460,000 km during the course of its lifespan.

Recommended Citation:
BirdLife International (2010) The Bar-tailed Godwit undertakes one of the avian world's most extraordinary migratory journeys . Downloaded from http://www.birdlife.org on 30/01/2023