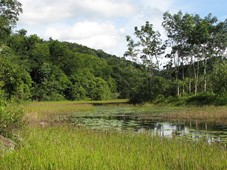 Degraded forest is regenerating © SAVE Brasil

The Serra do Uburu in Pernambucu State, Brazil holds great importance for biodiversity but is threatened by illegal logging and charcoal production. Since 2004, BirdLife Partner SAVE Brasil has been working to conserve the Atlantic Forest with support from the Aage V. Jensen Charity Foundation.

Just 2% of Pernambucu's Atlantic Forest survives, so despite its small size (by Latin American standards) of around 1,000 hectares, Serra do Uburu is of extreme biological importance. Recognised by BirdLife as an Important Bird and Biodiveristy Area (IBA), it is home to one of the rarest passerines in Brazil, the Alagoas Foliage-gleaner Philydor novaesi, and at least 20 other endemic species from the Atlantic Forest slopes.

At the start of the project, funding from AVJCF enabled BirdLife and SAVE Brasil to buy the 390 hectare Pedra Danta estate, adjacent to the existing Frei Caneca Private Nature Reserve (630 hectares). The forest in Pedra Danta was mostly intact, but entirely unprotected, and illegal logging and charcoal production were increasing because of high levels of poverty in surrounding communities.

SAVE Brasil hired a caretaker, and erected signs around the reserve boundary explaining that access was now restricted. Within a year, charcoal production has ceased, and gaps in the forest were beginning to regenerate.

Along with restoring degraded areas at Pedra Danta, the BirdLife Partner's next tasks were to persuade local people that the forest was worth protecting and work with them to find more secure and sustainable livelihoods.

In April 2007, the AVJCF approved another grant for Serra do Urubu. SAVE Brasil commissioned a socio-economic study of the communities, and worked with local NGOs with experience in social inclusion and poverty alleviation. The Serra do Urubu Conservation Education Centre was established, and SAVE Brasil began a programme of educational and outreach work.

Among other indicators of success at Serra do Urubu, annual bird monitoring confirmed that populations of the threatened species were stable. But problems had been displaced elsewhere, and charcoal production in particular was starting up in other forest fragments. SAVE Brasil presented a third proposal to the AVJCF with the aim of broadening the scope of the work to the entire region.

Serra do Urubu is one of the pilot areas for the "Partnership for the Restoration of the Atlantic Forest", an initiative involving NGOs, businesses and universities, which aims to restore 50 million hectares of forest by 2015. SAVE Brasil strategy includes developing agroforestry systems which help rebuild forest connectivity and reduce the pressure for timber and charcoal from the remaining forest patches. They are working with landowners to identify priority forest patches for restoration. Local people have received training at Pedra Danta, and are qualified to undertake forest restoration elsewhere.

Forests of Hope site - Serra do Urubu, Brazil
SAVE Brasil