Raising public awareness to save the Yellow-eared Parrot 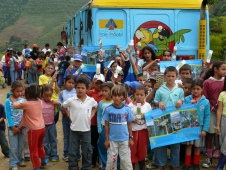 Yellow-eared Parrot was once common in the Andes of Ecuador and Colombia, but declined owing to unsustainable exploitation of the quindío wax palm upon which it is dependent for roosting, nesting and feeding. This palm has become highly threatened owing to the use of its fronds to adorn Palm Sunday processions. However, a highly successful publicity campaign backed by the Catholic Church has engendered considerable public support. In combination with active protection measures such as installing nest boxes, protecting palm seedlings and planting trees, this has led to the parrot population increasing to over 800 birds.

By the late 1990s, Yellow-eared Parrot Ognorhynchus icterotis, once common across the High Andes of both Ecuador and Colombia, had disappeared from Ecuador and appeared to be on the brink of extinction. However, in 1999, 81 birds were discovered in a remote region of the Colombian Andes, rekindling hopes for the future of the species (Salaman 1999, BirdLife International 2008).

The fate of this parrot is inextricably linked to that of the quindío wax palm Ceroxylon quindiuense, Colombia’s national tree and, at over 60 m, the world’s tallest palm. The parrot depends entirely on the tree for roosting, nesting and feeding. For centuries, wax palm fronds have been used to adorn Palm Sunday processions commemorating the entry of Jesus into Jerusalem. As a result, thousands of trees are felled each year and the palm has become highly threatened (Salaman 2001). The long-term survival of the parrot is therefore reliant on effective conservation of the quindío wax palm.

In response to the plight of these two species, Fundación ProAves (a local non-governmental organisation) and Conservation International (CI) established a community-based conservation and research programme in Colombia. A publicity campaign, including television and radio appeals, music concerts and a touring ‘Parrot Bus’, successfully raised awareness of the problems facing the parrot and its habitat throughout Colombia. By engendering considerable public support, local projects were then able to implement active protection measures such as installing nest boxes, protecting palm seedlings and planting trees. The campaign grew into an alliance of over 35 national NGOs, government departments and, perhaps most importantly, the Episcopal Conference of Colombia. With the endorsement of the Catholic Church, the project was able to bring to an end the use of wax palm fronds across large parts of the country by promoting sustainable alternatives during festivities. Through close collaboration with local people and the Church, the campaign has been a huge success. There are now over 800 birds in Colombia, divided between two main colonies, and it is hoped that the species can be encouraged to recolonise Ecuador.

Recommended Citation:
BirdLife International (2008) Raising public awareness to save the Yellow-eared Parrot . Downloaded from http://www.birdlife.org on 12/08/2022