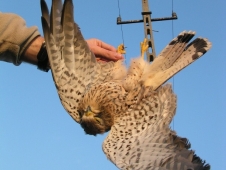 Ninety-five Italian bird species suffer mortality from powerlines, either through electrocution or collision, with groups of large species such as herons, cranes, owls and diurnal raptors being most affected due to their low degree of flight manoeuvrability.

The percentage of selected avian groups represented in powerline casualties

Based on 1,300 reports of individual powerline casualties from 11 mortality censuses carried out in Italy between the late-1970s and 2001. Rubolini, D., Gustin, M., Bogliani, G. and Garavaglia, R. (2005) Birds and powerlines in Italy: an assessment. Bird Conservation International 15: 131–145.

Expanding networks of overhead powerlines in Europe (an average 2.6 km of powerlines per km2 in Italy alone) pose a potential threat to a wide range of bird species. Recent analyses of Italian bird mortality censuses have found that 95 bird species (19% of Italy’s total bird species) suffer mortality from powerlines (Rubolini et al. 2005). Mortality rates were found to vary, but ranged up to a maximum of 86.9 dead birds per km of powerline per year. The most widely affected groups of species (in terms of the proportion of Italian species represented in powerline casualties) were owls and herons, followed by diurnal raptors, cranes, waders and gulls, and waterfowl, with passerines being least affected (see figure).

Powerlines can bring about bird mortality in two different ways—collision and electrocution. Collision affects mainly nocturnal migrants and birds with low flight manoeuvrability (such as cranes or herons), and poses a threat to birds on a local scale. Electrocution generally affects larger Italian species such as corvids, owls and diurnal raptors and can have significant effects on whole populations. Italian passerine species were relatively less affected by powerline mortality, possibly because of their small body sizes and high flight manoeuvrability.

Amongst the powerline casualties in Italy are species of European conservation concern such as Osprey Pandion heliaetus, which is a winter migrant from Scandinavia (BirdLife International 2004, Rubolini et al. 2005). Powerlines are known to be the main cause of mortality for Eurasian Eagle-owl Bubo bubo in Italian mountain areas, the breeding population of which is declining in Italy (e.g. Sergio et al. 2004). Severe losses have also been recorded in the reintroduced White Stork Ciconia ciconia populations (European threat status, Vulnerable) in northern Italy, with a 70% recovery of ringed birds killed by powerlines (Garavaglia and Rubolini 2000). Eurasian Bittern Botaurus stellaris and Little Bustard Tetrax tetrax, the populations of which are declining in Italy, are also recorded among the powerline casualties.