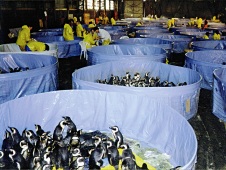 Oil spills at sea can kill large numbers of seabirds and have the potential to wipe out entire populations where these are small or localised. In South Africa, the African Penguin is particularly at risk because more than 80% of its population breeds within 100 km of a major harbour. Cleaning oiled penguins is a costly operation estimated, in 2003, at c.$100 for each individual successfully released back into the wild.

Oil spills at sea can kill large numbers of seabirds and have the potential to wipe out entire populations where these are small or localised. For instance, the wreck of the oil-tanker Prestige off north-west Spain in November 2002 caused the oiling of an estimated 115,000–230,000 individuals, of which only 23,181 birds of more than 90 species were actually retrieved (6,120 alive and 17,061 dead) (García et al. 2003). The spill may have contributed to extinction of the rare Iberian breeding population of Common Murre Uria aalge.

Over the last 100 years, the world population of African Penguin Spheniscus demersus (Vulnerable) has been reduced from c.1.45 million adult birds to fewer than 200,000 by egg- and guano-collecting, and by depletion of food-fish stocks by commercial fisheries (Nel et al. 2003). One of the most immediate threats is now mortality from oil spills, with a single slick capable of oiling thousands or tens of thousands of birds. The species is particularly at risk because more than 80% of its population breeds within 100 km of a major harbour, and the world’s largest oil-shipping route lies offshore of its entire breeding range. During the last decade, there have been two catastrophic oil spills, with 10,000 penguins oiled in 1994 and 20,000 in 1998, from the wrecks of the Apollo Sea and the Treasure respectively. However, there is also a substantial ‘background’ level of oil pollution from smaller, unreported spillages and deliberate illegal discharges during cleaning operations. On average, more than 2% of African Penguins are oiled each year.

Efforts to rescue, clean and rehabilitate oiled penguins and other seabirds have increased and improved over the years. In the 1970s, 55% of captured oiled penguins were released back into the wild in a healthy state; this figure rose to more than 86% in 2000, when the majority (up to 87%) returned to breeding colonies (Ryan 2003). This has played a significant part in reducing the continuing decline of African Penguin: the population is estimated to be 19% larger now than it would have been without rehabilitation efforts (Ryan 2003). Cleaning oiled birds is a costly operation for the voluntary and non-profit groups involved—the insurance claim for the seabird rescue during the Apollo Sea spill was US$589,000 and that for the Treasure US$1,459,000, equivalent to c.$100 for each individual successfully released back into the wild (Whittington 2003). Efforts to rehabilitate seabirds have been even more expensive in other parts of the world (Jessup 1998). Nevertheless, such sums are relatively tiny for the companies responsible for the pollution.

Recommended Citation:
BirdLife International (2004) Oil spills significantly reduce populations of seabirds and are costly to clean up . Downloaded from http://www.birdlife.org on 06/07/2022