Emperor penguins are likely to decline as sea-ice disappears 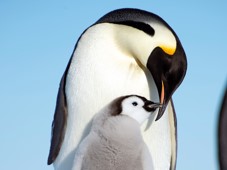 Emperor Penguin Aptenodytes forsteri colonies are declining as sea-ice disappears with warming temperatures. Sea ice is vital for breeding, moulting and foraging and models suggest the situation is set to worsen; the probability of extinction of one Antarctic colony is at least 36% by 2100.

Climate change is expected to drastically reduce the extent of sea ice by the end of the century, and the impacts are already being seen. Population declines of 50% at the Terre Adelie colony in Antarctica between 1952 and 2000 have already been observed, with lower survival being associated with high sea surface temperature and lower sea ice extent (Barbraud and Weimerskirch 2001).

These declines are likely linked to prey availability (Atkinson et al. 2004), with reduced krill (Euphausiacea) density with reduced sea ice extent, which likely results in increased penguin mortality. Hatching success was however lower with increasing sea ice extent, suggesting a trade-off between the benefits and limitations of sea ice extent on the demographic parameters (survival and breeding success) of Emperor Penguins (Barbraud and Weimerskirch 2001).

More recent research has looked at future scenarios to determine the fate of the same colony by 2100 (Jenouvrier et al. 2009). Sixteen climatic models and population models based on colony observations (1962-2005) were used to investigate the probability of extinction by 2100 due to variation in sea ice extent. Large declines in the number of breeding pairs is expected; a 93% decline is predicted between 2006 and 2018, and the probability of extinction of the colony is at least 36% by 2100, with the median number of breeding pairs expected to decline from ~6000 to ~400 in this time period (Jenouvrier et al. 2009).

On a larger scale, rises of global temperatures of 2ᴼC above pre-industrial levels is predicted to result in the loss of 34.8% - 40% of the world Emperor Penguin population, due to the expected reduction in sea ice extent and sea thickness (Fretwell et al. 2012, Ainley et al. 2010).