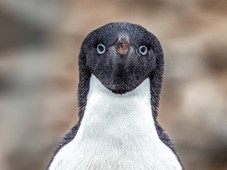 Adélie Penguin Pygoscelis adeliae declines in Antarctica are thought to be driven by a changing climate, with the influence of retreating sea ice, reduced krill density and increasing snow blizzards all influencing population trends. Declines of around 50% have been seen in the past 30 years, making penguin survival in the face of climate change a serious challenge.

Adélie Penguins rely on sea ice for breeding, whilst sympatric Chinstrap Penguins Pygoscelis antarcticus, also experiencing declines in the South Shetland Islands (Trivelpiece et al. 2011) are known as sea-ice avoiders (Fraser et al. 1992). The changes in sea ice are therefore not thought to drive these population trends directly, but indirectly through its effects on an important food source for both species: the Antarctic krill Euphausia superba (Trivelpiece et al. 2011).

Declines in krill density of up to 80% have been seen in the West Antarctic Peninsula and Scotia sea since the 1970s. This has been linked to both the reduction in sea ice extent (Atkinson et al. 2004) and the increase in krill redating pinnipeds and baleen whale populations as hunting pressures have decreased in recent years (Trivelpiece et al. 2011).

Increasing snowfall in the West Antarctic Peninsula is also thought to be linked to Adélie Penguin population declines. South facing colonies on Torgersen Island, Antarctica, have been shown to be particularly effected by spring prevailing winds enhancing snow accumulations, with greater declines (58%) than colonies not as wind exposed (32%) (Fraser & Patterson 1997, Patterson et al. 2003).