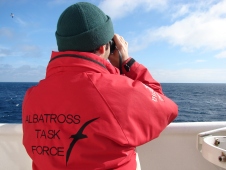 The Albatross Task Force is the world’s first international team of seabird bycatch mitigation instructors. It works with the fishing industry to raise awareness of seabird bycatch and demonstrate in situ the simple measures that can dramatically reduce it.

The scale of seabird, primarily albatross, bycatch in longline fisheries was first identified in the 1990s. In recent years, bycatch in trawl fisheries has also emerged as a serious issue. Since the problem was identified, a number of simple, cheap and effective mitigation measures have been developed which, once implemented, dramatically reduce the number of birds being killed. However, while the practical solutions exist, seabird bycatch in many fisheries remains at unsustainably high levels. Recognising the gap between knowledge, policy and actual action on the deck of fishing vessels, BirdLife’s Global Seabird Programme created the Albatross Task Force (ATF) in 2005 to work directly with fishermen to raise awareness of seabird bycatch issues and demonstrate the practical solutions to combat it.

The first team of instructors was established in South Africa and was closely followed by teams in Brazil and Chile. In early 2008, coverage expanded into Argentina, Namibia and Uruguay, and subsequently Ecuador. The ATF is currently expanding into Peru, completing its presence in the most important countries for seabird bycatch in southern Africa and South America. The Task Force now operates in eight countries and employs 16 instructors.

The primary tasks are to work with fishermen and fishery managers, run training workshops on-shore and give practical demonstrations at sea. In 2009/10, the ATF has led an intense set of experimental mitigation research projects in seven countries and nine fisheries to determine best practice measures in longline and trawl fisheries. The influence of established ATF teams has been far reaching:

The Task Force is at a stage where much of the necessary research has been completed and significant advances in raising awareness in government and industry have been reached. Ensuring adoption of regulations in each country and adoption across entire fleets is a crucial next step, and the ATF is well-placed to carry momentum toward this landmark achievement.

RSPB Save the Albatross

Recommended Citation:
BirdLife International (2012) BirdLife's Albatross Task Force is bridging the gap between conservationists and fishermen. Downloaded from http://www.birdlife.org on 31/01/2023