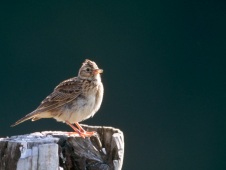 Many European farmland birds have undergone massive declines over the last few decades, particularly in European Union (EU) Member States where the Common Agricultural Policy (CAP) encourages farmers to practise intensive farming. Unless the CAP is reformed, similar declines can be expected in the new EU countries of central and eastern Europe, which are the strongholds for many farmland species.

Farmland bird declines between 1970 and 1990 in Europe

Farmland birds are declining severely across most of the intensively farmed European countries, particularly in European Union (EU) Member States where the Common Agricultural Policy (CAP) applies (see figure  a) (Donald et al. 2001, 2002). Intensive farming driven by CAP subsidies has produced large quantities of food but at great cost to the environment. By comparing between countries, it is clear that the biggest declines are directly related to intensive agricultural methods (Donald et al. 2001, 2002): 30% of the variance in farmland bird declines across countries in Europe can be explained solely by their differences in cereal yield. Few birds can breed in the extreme monocultures that have come to characterise much of northwest Europe’s arable landscape. Such habitat degradation is likely to have similar detrimental effects on other components of European biodiversity (Stanners and Bourdeau 1995). The birds of the non-EU states of central and eastern Europe have fared better mainly because agricultural practices have remained less intensive and, as a result, less environmentally destructive. Of concern are the 12 countries that have joined the EU since 2004, and whose agriculture now faces CAP-subsidised intensification. Unless the CAP is radically reformed, these new EU states will probably experience similar declines in the diversity and abundance of their farmland bird species (Donald et al. 2001).

In non-EU countries, increasing agricultural intensification has also had negative effects on birds. In Poland, breeding density of Eurasian Skylark Alauda arvensis has declined threefold in areas of most intensive farming (figure b; Donald et al. 2001, 2002). Skylarks suffer in areas of high farming intensity because of a lack of semi-natural habitat features (such as vegetation mosaics) and also because of the intensive year-round use of land for multiple cropping.

Recommended Citation:
BirdLife International (2006) Agricultural intensification has caused the decline of many common bird species in Europe. Downloaded from http://www.birdlife.org on 06/02/2023