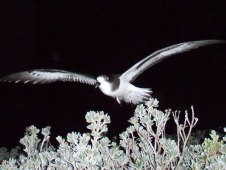 Many nocturnally-active seabirds are sensitive to light pollution and can become easily disorientated by intense sources of artificial light. In exceptional circumstances enormous numbers can be drawn to the lights of boats and structures such as oil platforms and lighthouses, often with fatal consequences. Coastal light pollution is a particular problem for fledgling petrels and shearwaters, which are lured to urban lighting as they attempt to make their first flights out to sea. Once grounded, they are often unable to become airborne again and frequently succumb to predation or starvation.

Many seabirds—including most of the Procellariiformes (shearwaters, petrels and albatross)—are active at night. This allows them to avoid predation, particularly important during the breeding season when they must evade diurnal avian predators, such as gulls and raptors, when returning to and leaving from their nesting sites (Montevecchi 2006). Nocturnal seabirds often exploit bioluminescent and vertically migrating prey and may also use the night sky to navigate (Imber 1975, Reed et al. 1985). Unfortunately, many nocturnal seabird species are sensitive to the disorientating and often injurious influences of artificial light (Montevecchi 2006). Attraction to artificial sources of light has been recorded in at least 21 species of Procellariiformes, as well as in several other seabird groups and has a detrimental effect on some globally threatened populations (Reed et al. 1985).

Vulnerability to artificial lighting varies between different species and age classes and according to the influence of season, lunar phase and weather conditions. In general, young birds are more likely to become disorientated by man-made light sources. Most collisions occur in poor weather, when the moon is new or during periods of peak migration (Montevecchi 2006).

At sea, oil and gas platforms and fishing vessels, especially those that use lights to attract prey, are the main sources of artificial light. An estimated 63–89% of the world catch of squid is caught using intense artificial lighting and the practice is thought to be exerting a deleterious influence on several seabird species, including Xantus's Murrelet Syntbliboramphus hypoleucus (Pacific Seabird Group 2002, Montevecchi 2006). The scale at which seabirds are attracted to illuminated fishing vessels can be immense. On one occasion, an estimated 6,000 Crested Auklet Aethia cristatella, with a combined weight of around 1.5 metric tons, nearly capsized a fishing fleet after they became grounded in bad weather (Dick and Davidson 1978). In another incident, a research vessel passing through waters to the west of South Georgia and the South Sandwich Islands reported being struck by almost 900 seabirds during one night after the birds were attracted to the vessel’s powerful ice-lights (searchlights used to spot floating ice). Although 684 birds were released alive, 215 birds were killed, mostly Blue Petrel Halobaena caerulea, Common Diving-petrel Pelecanoides urinatrix, South Georgia Diving-petrel P. georgicus and Antarctic Prion Pachyptila desolata (Black 2005).

Coastal light pollution has a particularly insidious impact on burrow-nesting petrels and shearwaters. Each year around the world, thousands of young petrels are disorientated and grounded as a result of artificial light as they attempt to make their first flights out to sea in a phenomenon known as ‘fallout’ (Reed et al. 1985, Telfer et al. 1987, Le Corre et al. 2002, Rodríguez and Rodríguez 2009, Miles et al. 2010). Grounded fledglings often die from their injuries or, unable to take off without a long ‘runway’, succumb to predation or starvation. Even those birds that are not grounded may become ‘entranced’ by the light sources and circle them for many hours reluctant to fly out into the darkness. The energetic costs of such distractions may also have serious consequences for fledgling survival (Montevecchi 2006).

On the Hawaiian island of Kauai, coastal lighting has been responsible for massive fallout events of young Procellariiformes (Reed et al.1985, Telfer et al. 1987, Ainley et al. 1997, 2001, Podolsky et al. 1998, Day et al. 2003). In some years, up to 1,800 Newell’s Shearwater Puffinus newelli, an Endangered species, are grounded as well as small numbers of Madeiran Storm-petrel Oceanodroma castro and the Vulnerable Hawaiian Petrel Pterodroma sandwichensis. Thankfully, mitigative measures are now in place to reduce the impact of artificial light on seabirds. For instance, after it was shown that lights from the Kauai Surf Hotel at the mouth of the Huleia River were responsible for almost half of the seabird groundings in 1981 (Telfer et al. 1987), modification were made to the hotel in order to minimise skyward lighting during periods of fledging (Reed et al. 1985).

It is important that effective measures to reduce coastal light pollution, such as removing unnecessary illumination, reducing light intensity and eliminating unnecessary skyward and seaward light projection, are more widely implemented in more parts of the world.

Recommended Citation:
BirdLife International (2012) Light pollution has a negative impact on many seabirds including several globally threatened species. Downloaded from http://www.birdlife.org on 22/05/2022