Innovation in the protection of forests in Indonesia 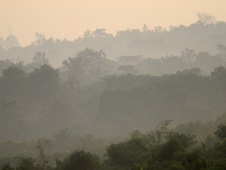 Indonesia, and particularly the island of Sumatra, holds some of the most biologically diverse yet threatened rainforests in the world. The BirdLife Partnership’s Harapan Rainforest initiative is conserving and restoring nearly 100,000 hectares of Sumatran rainforest. To do this, it brought about a new type of forest management licence in Indonesia, under which, nationwide, 219,350 hectares are being restored and applications are under consideration cover a further 4 million hectares.

Source: Burung Indonesia and the Indonesian Ministry of Forestry

Indonesia hosts some of the most extensive and biologically diverse tropical forests in the world, and the lowland rainforests of Sumatra are particularly important. However, Indonesia’s forests have shrunk dramatically in the past few decades. They have been cut for timber and, once cleared, have been converted by companies to palm oil or commercial pulpwood plantations, at which point forest loss becomes effectively irreversible.

Forest that has been logged or otherwise degraded, but not cleared outright, can be restored, bringing great conservation gains; in addition, restoration brings benefits in terms of climate change mitigation and adaptation, and economic benefits to local people and the region through other ecosystem services. However, the framework for management of Indonesia’s forests did not readily allow rights to restore degraded forest. For this reason, Burung Indonesia, with the support of the BirdLife Partnership, persuaded the Indonesian Ministry of Forestry to allow private organisations to manage logging concessions in the interests of nature conservation.

In June 2004, the Ministry passed a decree on Timber Forest Utilization Permits for Natural Forest in Production Forest, enabling ‘Production Forest’ designated for logging to be restored and managed for conservation and other benefits provided by natural forests. This was converted into law, effected by the Indonesian President in 2007 and, in the same year, the first Ecosystem Restoration Concession licence was issued, to the BirdLife consortium for 52,170 hectares of rainforest in Sumatra—Harapan Rainforest. A second licence in 2010 brought the area being restored by BirdLife at Harapan Rainforest under this new legal tool to 98,555 ha.

The achievement in gaining restoration rights to nearly 100,000 hectares of some of the world’s most diverse yet threatened forests is considerable, but the positive impacts are greater still because any eligible organisation can apply for an Ecosystem Restoration Concession licence. By the end of 2012, three more licences had been issued to other organisations, bringing the total area being restored to 219,350 hectares. Even more remarkably, the Indonesian Ministry of Forestry have received a huge number of applications covering a total of 4,243,188 hectares of Production Forest land in Indonesia, or 17% of such land that is currently unlicenced (which is the most prone to illegal exploitation) in the country. It cannot be assumed that all this area will be licenced for restoration, but the volume of applications clearly shows the interest in the concept.

Ecosystem Restoration Concessions provide a strategic way to reverse the deforestation and degradation of Indonesia’s production forests, which constitute approximately 80 million hectares of the 133 million hectares of the country’s forest estate. Other countries in the region, along with bilateral and multilateral agencies, are taking a close interest in Harapan Rainforest, and several have providing large-scale support. Overall, BirdLife’s work at Harapan Rainforest has brought about a step-change in the management and restoration of production forest in Indonesia, a model for application in other countries, and the inspiration for other conservation organisations to redouble their conservation efforts based on a new vision for what is possible.

Recommended Citation:
BirdLife International (2013) Innovation in the protection of forests in Indonesia. Downloaded from http://www.birdlife.org on 05/02/2023