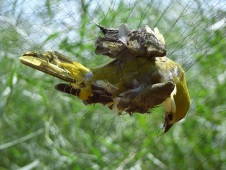 A significant illegal trade in birds for consumption into the EU from south-east and central Europe has been recognised as a serious conservation threat to some species. Illegal mist-netting, lime-sticking, tape-luring and automatic shotgun hunting are being used to maximise the numbers of birds killed resulting in an industry worth EUR10 million per year.

The illegal hunting and trapping of European birds has long been an issue of conservation concern. Birds have been trapped for the pet trade and as food for hundreds of years; however, the highly effective hunting methods now developed have created an unsustainable trade which is seriously threatening some species.

The majority of illegal hunting occurs in south-east and central Europe, particularly Bulgaria, Romania and Serbia and Montenegro from where the birds are exported into northern Italy (Steiner 2006). Birds are then sold for consumption as a delicacy in restaurants. Birds seized in trade are estimated to be worth EUR2–3 million per year, with the industry as a whole being estimated to be worth EUR10 million per year. Illegal mist-netting, lime-sticking, tape-luring and automatic shotgun hunting are being used to maximise birds killed which are then concealed in cars or amongst other food products in refrigerated lorries and transported across central Europe (Rocco and Isotti 2006).

Some 38,000 Common Quail Coturnix coturnix were shot in Serbia over two months in 2004—more than the entire breeding population of Serbia, over 90% of which were estimated to have been hunted illegally using automatic shotguns and tape-lures (Simic et al. 2003, Simic and Tocakov 2005). These actions correspond with population declines of quails in eastern Europe including Ukraine, Romania, Bulgaria, Albania, Serbia and Montenegro, Greece and Turkey whereas, elsewhere in Europe, populations are stable or increasing.

Unless further attention is given to this trade, many European birds may experience nationally and locally significant population declines as a result of over-harvesting.