Human disturbance to seabirds at sea 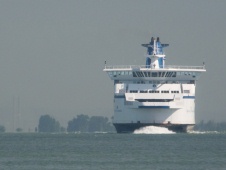 Shipping is a cause of widespread disturbance to seabirds at sea, and it occurs both within and outside protected areas. Moving vessels cause temporary habitat loss, collisions, and chemical and noise pollution for foraging and resting seabirds. Projected increases in shipping traffic and our scant (but increasing) knowledge of seabirds’ offshore behaviours suggest that this is an issue warranting much more attention in the future.

Seabirds spend the vast majority of their life at sea, with sub-adults often not returning to land until several years after they have fledged. The advent of technologies that enable the tracking of seabird movements and behaviours (e.g., loafing, diving, and flying) has paved the way for research into their at-sea activities. Although current information is still limited, there is some consensus that aside from fishing and on- and off-shore energy development, the greatest direct disturbance to birds at sea derives from shipping traffic (Schwemmer et al. 2011).

Shipping traffic can directly impact seabirds, whereupon vessels collide with seabirds outright, temporarily disturb their marine habitat, impede foraging, or elicit a flight response amongst the birds present. Indirect impacts include releasing chemical pollutants and litter, and modifying the ecology of the marine habitat permanently through repeated disturbance. Studies conducted to-date have tended to focus on individual species and there has been no large-scale assessment of the effects of marine traffic on the threatened species sharing the offshore environment. Understandably, this would be logistically difficult to achieve, but it is also essential in order to be able to carry out effective marine planning for the conservation of many at-risk marine species.

Of the few studies conducted, the results suggest species- and case-specific responses to shipping disturbance. Speckman et al. (2004) found that Marbled Murrelets Brachyramphus marmoratus (Endangered on the 2012 IUCN Red List) in Auke Bay and Fritz Cove in Alaska were reasonably habituated to marine vessels, such that they tended to paddle away, or dive, rather than fly, which is more energetically intensive. Faster boats would be more likely to invoke either a flight, or dive response, and juveniles reacted more often, albeit at closer vessel distances (Bellefleur et al. 2009). Birds holding fish in their bills would swallow the prey when disturbed by a vessel (Speckman et al. 2004), leading the authors to suggest that this sort of behavioural response could interrupt normal feeding regimes, particularly where provisioning parents are involved, thereby causing substantial energetic cost to the individuals concerned. This could be critical in areas where prey is scarce and when dependent young require regular feeds to avoid dehydration or retarded growth.

Kittlitz’s Murrelets Brachyramphus brevirostris (Critically Endangered) foraging near-shore have their foraging temporarily suppressed by passing vessels, although normal behaviour resumes within the same day (Agness et al. 2008). With the projected future increases in shipping traffic (e.g., cargo fleets; IMO 2012), this rate of behavioural recovery might be too slow to avoid a permanent disruption to foraging areas by continuous streams of vessels. For severely threatened species, such as this species, this is a cause for concern.

Recreational vessels are probably the greatest disturbance to seabirds within protected areas, since most freight vessels tend to be excluded from these zones and Marine Protected Areas (MPAs) are often managed to specifically encourage recreation (amongst other uses). Furthermore, whilst cargo traffic generally has well-defined movements, fishing and recreational vessels tend to be more unpredictable and move more swiftly, heightening the risk of collisions. Given the location of MPAs in areas important for threatened seabirds, the risk of disturbance to threatened species from recreational boating will be particularly high. Recreational boat traffic disturbed the foraging of European Shags Phalacrocorax aristotelis (Least Concern globally, but considered threatened within Europe) within a MPA off the Iberian Penninsula (Velando and Munilla 2011).  Given the variability in quality of foraging areas within the MPA, reducing the volume of boat traffic and/or limiting boating to areas poor for seabird foraging would be the most effective management prescription.

It is clear that some species are more sensitive to approaching vessels than others (Schwemmer et al. 2011). Recommendations for managing the effects of shipping disturbance thus need to be evaluated based on a case-specific basis (e.g., Black Guillemots Cepphus grylle in the Bay of Fundy, Canada; Ronconi and St Clair 2002; and various species in Florida; Rodgers and Schwikert 2002).

Velando, A., and Munilla, I. (2011). Disturbance to a foraging seabird by sea-based tourism: Implications for reserve management in marine protected areas. Biol. Conserv.144: 1167–1174.