Deforestation in the Mau Forest, Kenya, is impacting wildlife and people 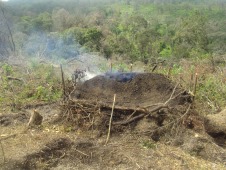 The Mau Forest Complex, one of Kenya’s most important water catchments, is severely threatened by unsustainable exploitation such as forest clearing for charcoal production © Kenya Forest Working Group

The Mau Forests Complex (MFC) forms the largest closed-canopy forest ecosystem in Kenya, the largest indigenous montane forest in East Africa, and is the most important water catchment in the Kenyan Rift Valley and Western Kenya. Its 22 forest blocks comprise an area of about 417,000 hectares. It is identified as an IBA because of its rich highland bird communities. Recent investigations show that the MFC has been affected by widespread unplanned settlements, irregular forest land allocation and illegal extraction of forest resources. Specifically, widespread encroachment and the degazettement of forest reserves have destroyed approximately a quarter of the MFC over the last 15 years. In addition, sections of the MFC have been impacted by forest plantations (10% of Mau forest), subsistence and cash crop farming and unregulated logging concessions. Scientists predict that further destruction of the MFC will cause an environmental disaster in Kenya and significantly reduce river flows and lake levels.

Forest is the most important habitat for over half of bird species in Africa. However, forests are subject to a range of threats that are leading to their widespread loss and degradation (Eshiamwata 2012). Forests provide a range of essential services, including water purification, carbon cycling and sequestration and the provision, and enrichment of soil nutrient . Consequently, the loss of forests has direct implications for people.

The Mau Forest Complex is the most important water catchment in the Rift Valley and Western Kenya. Its forests provide critical environmental services to the country: freshwater provisioning, river flow regulation, flood mitigation, recharge of ground water, erosion control, water purification, biodiversity conservation and micro-climate regulation. The ecosystem services provided by the MFC support a range of economic sectors including agriculture and tourism. The market value of the goods and services generated annually in the tea and tourism sectors alone, to which the MFC contributes, is estimated in excess of Ksh20 billion (US$ 229 million).

The MFC supplies water to urban areas and is the upper catchment area for 12 rivers that flow into five major lakes: Baringo, Nakuru, Natron, Turkana, and Victoria. Three of these lakes are international water bodies—Natron (Kenya and Tanzania), Turkana (Kenya and Ethiopia) and Victoria (Kenya, Tanzania, Uganda). The MFC provides water to the Mara and Serengeti ecosystems and is important to the water resources of the River Nile as five of its 12 major rivers feed Lake Victoria.

The pace and severity of destruction and degradation of the MFC have generated increasing concern and publicity. The restoration of the MFC is of major interest to the government of Kenya and is now a national priority. The recent politicization of the removal of encroachers from several forest blocks in the southern MFC demonstrates the importance of the ecosystem and the extent of the vested interests involved.

Recommended Citation:
BirdLife International (2013) Deforestation in the Mau Forest, Kenya, is impacting wildlife and people. Downloaded from http://www.birdlife.org on 30/06/2022

Key message: Many species depend on forests, which are being lost at an alarming rate
Case studies