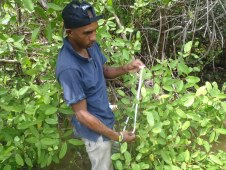 Grupo Jaragua (BirdLife in the Dominican Republic) conducted an 18-month site-project entitled Mangroves in Laguna de Oviedo: conservation status and reforestation in areas used by local communities. The project focused on improving the conservation of mangrove ecosystems in Jaragua National Park (JNP) through monitoring, reforestation and awareness activities with the participation of local communities. Grupo Jaragua found that, while there is no direct exploitation of mangroves around Laguna de Oviedo, a number of small-scaled impacts were identified that could compromise the mangrove ecosystems in the long-term. The project was part of a small grant scheme, funded by the MacArthur Foundation that has supported and built the capacity for locally-based mangrove conservation and education and awareness in the Insular Caribbean.

Residents from the surrounding community of El Cajuil have long used this wetland´s mangrove resources for food, fuel wood and other extractive purposes. Also, impacts by tropical storms and hurricanes on the lagoon´s natural ecosystems (including mangrove areas) have been reported by the local folk. Furthermore, there is an increasing presence and usage of fast-growing, non-native invasive plants, such as Neem Tree Azadirachta indica for shade.

In order to improve the conservation status of Laguna de Oviedo´s mangroves—and contribute to the overall conservation of mangrove ecosystems in JNP—between 2011- 2013 Grupo Jaragua (BirdLife in the Dominican Republic) implemented the site-project entitled Mangroves in Laguna de Oviedo: conservation status and reforestation in areas used by local communities. The main activities were: a mangrove ecosystem health assessment; implementation of bird and site monitoring through the use of the IBA monitoring framework; environmental celebrations to raise local awareness about the importance of mangroves, and plantation of buttonwood mangroves. All project activities were conducted with the participation of Local Conservation Groups and communities.

Grupo Jaragua found that while there is no direct exploitation of mangroves around Laguna de Oviedo, a number of small-scaled impacts were identified that could compromise JNP´s mangrove ecosystems in the long-term.

This project was implemented with local community members, identified and trained during years of engagement between Grupo Jaragua and the surrounding communities of JNP. Especially in Laguna de Oviedo, where they have been developing a process of local empowerment through awareness-raising, field work and promotion of sustainable/alternative economic activities that render benefits locally and ultimately support conservation of the site. This pre-existing relationship and trust greatly facilitated local involvement around the theme of mangroves and allowed for successful achievement of all planned activities.

The project contributed to improving the conservation status of mangroves in Laguna de Oviedo through bird and site monitoring activities; reforestation (in order to provide people with an alternative to replace the use of invasive exotic tree plants) and awareness through commemoration of environmental dates. Awareness-raising activities (especially planting mangroves!) were very popular and helped generate local interest in this project as well as opportunities to learn more about preserving the natural goods and services derived from mangroves. Active participation from local people in raising awareness at site-based level contributes to the conservation of globally important bird and biodiversity areas and ultimately decreases pressures over these sites.