Working together to tackle the crisis in East Asian coastal wetlands 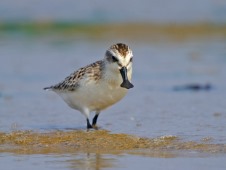 The BirdLife Asia Partnership is developing a new project at 11 intertidal wetland IBAs in the East Asian- Australasian Flyway, which are critically important for the conservation of threatened and declining waterbirds and the livelihoods of people. The project is mobilising Local Conservation Groups for the protection and management of wetland habitats, and developing partnerships with protected areas and local government agencies. 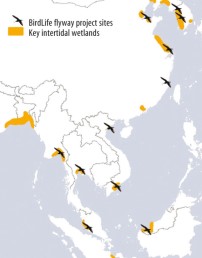 The East Asian-Australasian Flyway (EAAF) extends from Arctic Russia and Alaska (USA) to Australia and New Zealand, and it encompasses most of East Asia and all of South-East Asia. Over 50 million migratory waterbirds, including eight million waders, use the flyway annually. The countries in the EAAF support more than one-third of the global human population, and many of them are experiencing a period of dynamic economic growth, which is putting intense pressure on migratory birds and their habitats.

Tidal sand- and mud-flats are particularly highly threatened. A recent study by IUCN (MacKinnon et al. 2012) found that intertidal habitat is being lost in most countries in the flyway, in particular in China (51% already ‘reclaimed’) and South Korea (60%), with approved and on-going reclamation projects covering much of the remaining tidal flats. At least 33 Globally Threatened and Near Threatened waterbird species occur in the EAAF, more than twice as many as in any other flyway, including 24 which are heavily dependent on the intertidal zone. Tidal flats are amongst the most productive ecosystems on earth, and their loss is also impacting on the livelihoods of millions of people.

The BirdLife Asia Partnership is developing a project for the conservation of intertidal wetlands and the specialised species they support. Eleven intertidal wetland IBAs have been chosen for inclusion in the project, because they are of critical importance for migratory waterbirds (they correspond very closely to the key areas of intertidal habitat in East Asia identified in the IUCN study) and places where BirdLife has the capacity to implement conservation actions.

The project will include activities to address the threats to the 11 sites, building upon the on-going work of the local BirdLife Partners. One of the key activities will be to mobilise local communities for the protection and management of wetlands habitats by establishing and building the capacity of Local Conservation Groups (LCGs). The BirdLife Partners and the LCGs will seek to develop partnerships with protected areas and local government agencies at the project sites, and will provide information and advice to these organisations that is relevant to the conservation of the sites and migratory birds.

In China, the introduced invasive smooth cordgrass Spartina alterniflora is rapidly colonising the tidal flats and reducing feeding habitat for waders and other waterbirds. At Chongming Dongtan Nature Reserve, where the reserve authorities are currently removing a large area of Spartina, the project is planning to monitor how the wetland habitats recover following its removal and to develop a case study that can be applied elsewhere in eastern China.

The availability of data on the distribution and populations of migratory waterbirds, and on the situation at specific sites, is a significant constraint on effective conservation action in the EAAF. BirdLife is working with the East Asian-Australasian Flyway Partnership to strengthen the monitoring of waterbirds and wetlands, and to improve the availability of data on these species and their habitats.

Another constraint is the low awareness within the EAAF of migratory birds and the threats to these birds and their wetland habitats, and of the value of wetlands for the provision of ecosystem services to people. The project will organise awareness-raising activities, including an annual flyway-wide festival with the theme “Welcome to the birds”, which will be timed to coincide with the southwards migration in October.

Recommended Citation:
BirdLife International (2013) Working together to tackle the crisis in East Asian coastal wetlands. Downloaded from http://www.birdlife.org on 28/11/2022