Wind turbines can cause significant deaths in bird species 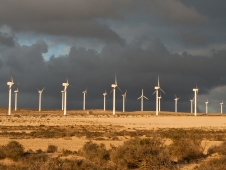 Research conducted in Tarifa, southern Spain, reveals that a small numbers of inappropriately located wind turbines can cause considerable mortality in birds of prey.

At Tarifa, overlooking the straits of Gibraltar in southern Spain, a number of wind farms totalling 799 turbines have been constructed.  A wide range of cliff nesting raptors, including Griffon Vultures Gyps fulvus, Egyptian Vultures Neophron percnopterus, Bonelli’s Eagles Aquila fasciata, Short-toed Snake-eagles Circaetus gallicus, Common Kestrels Falco tinnunculus and Peregrine Falcons Falco peregrinus are common in the area. In addition, the Straits of Gibraltar are a well-used migration route for birds travelling between Europe and Africa, with thousands of migratory soaring birds passing through the area each year.

It has been estimated that, since 2002, turbines located over two sites in the Tarifa region have been responsible for an average of 57 Griffon Vulture and 67 Common Kestrel deaths per year. Most of the individuals have been killed by a small number of turbines. Across a subset of wind farms, mortality rates average 1.33 birds per turbine/year, among the highest rates of mortality ever recorded (Barrios and Rodriguez 2007, de Lucas et al. 2012). These mortality rates are likely to impact on raptor populations as they are long lived species with low reproductive rates and low natural mortality rates. An increase in the mortality rate can upset the population dynamics and could lead to a regional population decline.

Other studies  from across Spain have also concluded that inappropriately places and planned wind farm developments have had significant  impacts on both Griffon Vulture and Egyptian Vulture populations as a result of increased mortality (Carrete et al. 2009, Martinez-Abrain et al. 2012).