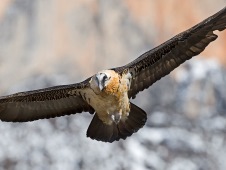 Poorly located wind farms can have significant negative impacts on birds, through loss of habitat, disturbance and in particular mortality through collisions with the turbine blades. Large, soaring birds including vultures are particularly prone to colliding with wind turbines. Conservationists are concerned that proposed wind farms in the Lesotho Highlands, a critical habitat for declining populations of Bearded Vulture Gypaetus barbatus and Cape Vulture Gyps coprotheres, could cause local species extinctions. Careful planning is required to locate wind farms in areas with minimal impact on birds and other wildlife.

Many Africans lack access to electricity. Delivering safe, reliable energy is an enormous challenge, but this is also an opportunity to ensure that the electricity requirements are met in a clean, environment-friendly and sustainable manner. According to Global Energy Outlook 2012 (Global Wind Energy Council 2012), Africa’s large areas and relatively low population density mean that a broad mix of decentralized technologies will be required to meet the needs of the region. As a result, the report suggests that wind power has the potential to play an important role in delivering energy to Africa.

Unfortunately, poorly located wind farms can have significant impacts on birds. Impacts include loss of habitat, disturbance and, most concerning, mortality through collisions with the turbine blades (Drewitt and Langston 2006).  Large, soaring birds such as vultures appear to be particularly prone to colliding with wind turbines. For example, high collision rates have been observed in Griffon Vultures Gyps fulvus (De Lucas et al. 2012). Scientists are concerned that wind farms proposed in the Lesotho Highlands, a critical habitat for already-declining populations of Bearded Vulture Gypaetus barbatus and Cape Vulture Gyps coprotheres, could cause the local extinction of these species (e.g. Rushworth and Krüger 2013).

BirdLife South Africa and its partners (both local and international) have been working hard to ensure that the issue receives the necessary attention. With invaluable support from local and international specialists, BirdLife South Africa has submitted detailed comment in response to the Environmental Impact Statement for the proposed Letseng Wind Farm (the most advanced of the proposed wind farms in Lesotho). The Royal Society for the Protection of Birds (RSPB, BirdLife in the UK), the BirdLife International Africa Partnership Secretariat, the Peregrine Fund, Ezemvelo KZN Wildlife and the Durban Natural Science Museum have all lent their support.

BirdLife South Africa hopes to work with the applicant, the Government of Lesotho and its partners to help identify more suitable sites for renewable energy generation, where impacts on the environment, including avifauna, can be minimised. This will require careful planning. BirdLife South Africa is confident that by working together more sustainable and bird-friendly energy solutions can be found.