Tsunamis can have a devastating impact on seabirds colonies 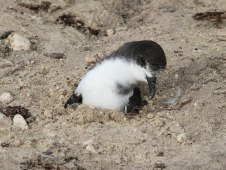 For bird species that inhabit low-lying islands and reefs, tsunamis are among the most potentially catastrophic natural events. The 2011 Tōhoku earthquake off the coast of Japan was one of the most powerful earthquakes to occur since modern record-keeping begin, and resulted in a major tsunami whose effects were felt as far away as Alaska and Chile. The seabird breeding colony on Midway Atoll, roughly halfway between North America and Asia, was particularly badly hit with tens of thousands of birds washed away.

Extreme natural events such as floods, tornadoes, hurricanes and earthquakes can have catastrophic human, environmental and economic impacts. Tsunamis—triggered by underwater seismic activity—can be amongst the most destructive. For instance, the series of tsunamis that occurred on 26th December 2004 following an undersea earthquake off the west coast of Sumatra, Indonesia, was one of the deadliest natural disasters in recorded history (Lay et al. 2005). Approximately 230,210 people were killed across 14 countries, including 168,000 in Indonesia alone. The catastrophe also had a huge environmental impact, affecting ecosystems across the entire ocean basin and even flooded a colony of King Penguins Aptenodytes patagonicus in the Crozet Archipelago some 6,500 km from the earthquake epicentre (Viera et al. 2006).

Birds that nest on beaches, low-lying islands and reefs are especially vulnerable to tsunamis. On 11th March 2011, an earthquake off the Pacific coast of Tōhoku, Japan triggered a powerful tsunami that devastated neighbouring coastal communities and left many thousands dead. Hours later the tsunami reached Midway Atoll (6.2 km2) located near the north-western end of the Hawaiian archipelago. Midway is a National Wildlife Refuge administered by the U.S. Fish and Wildlife Service (FWS) and forms part of a larger UNESCO World Heritage Site called Papahānaumokuākea Marine National Monument. The atoll is home to over three million nesting seabirds of 21 species, with the North-western Hawaiian Islands as a whole holding over 98% of the world’s breeding Laysan Phoebastria immutabilis (Near Threatened) and Black-footed Albatross P. nigripes (Vulnerable). At the time of the tsunami, 482,909 pairs of Laysan and 28,581 pairs of Black-footed Albatross were breeding on the atoll, along with an unknown number of Bonin Petrel Pterodroma hypoleuca, a burrow-nesting species. There was also a single pair of Short-tailed Albatross Phoebastria albatrus (VU)—the first time this species had been recorded successfully breeding away from colonies in Japan (FWSa 2011).

The tsunami completely over-washed the fringing reef and the smaller Spit Island, whilst approximately 60% of Eastern Island and 20% of Sand Island were inundated. Many thousands of young birds were washed away. On Spit Island, for example, only four chicks survived where, prior to the tsunami and two earlier fierce storms, there had been 1,498 Laysan and 22 Black-footed Albatross nests. In total, more than 110,000 albatross chicks and at least 2,000 adults were lost from across the atoll (FWSa 2011). It is not known how many Bonin Petrels were lost, but it could have been thousands. Thankfully, the refuge’s most famous resident—a female Laysan Albatross known as "Wisdom" and thought to be the oldest wild bird in the world—survived and biologists are confident that, with effective management, seabird numbers will recover over time (FWSb 2011).

Recommended Citation:
BirdLife International (2012) Tsunamis can have a devastating impact on seabirds colonies. Downloaded from http://www.birdlife.org on 29/11/2021