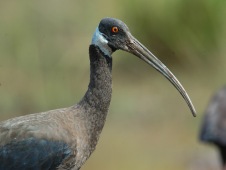 Traditional land management practices can be vital to maintaining biodiversity. The landscape of the Western Siem Pang in Cambodia has been shaped over generations by the grazing of domestic livestock. Safeguarding the pastoral livelihoods of local communities will therefore not only benefit the region’s people, but also play an important role in conserving some of Indochina’s most imperilled bird species.

The forests of Western Siem Pang in the remote North-east of Cambodia represent one of the last remnants of an ecosystem that once dominated much of southern Indochina and Thailand. A great expanse of largely intact dry dipterocarp forest covering over 150,000 ha, it has a rich biodiversity that includes one of the most important bird communities in South-east Asia. The region supports five Critically Endangered bird species, including the largest remaining population of White-shouldered Ibis Pseudibis davidsoni in the world.

This seemingly natural landscape has in fact been shaped by centuries of human activity. Research by BirdLife International in Indochina—Cambodia Programme (BirdLife Cambodia), in collaboration with the University of East Anglia (UEA) in the UK, has shown that traditional land management is integral to creating and maintaining the ecosystem (Wright 2008, Wright et al. 2010). Scattered throughout the forests of Western Siem Pang are seasonal pools called trapaengs. These are a critical habitat for the area's wildlife and of huge importance to the site’s threatened bird species. Indeed, White-shouldered Ibis now depend almost exclusively on food foraged from trapaengs to feed their chicks (Wright 2008). The activities of traditional pastoralists and their herds have been fundamental in creating this habitat. The grazing of cattle and buffalo produces clearings in the forest, whilst their trampling and wallowing creates marshy depressions which, through generations of continued use, deepen into sizeable pools. Indeed, these domestic herds may fulfil an ecological role historically performed by wild ungulates that are now absent from the area; bovines such as Asian Buffalo Bubalus arnee, Gaur Bos gaurus, Banteng B. javanicus and Kouprey B. sauveli.

The trapaengs are also central to the lives of local people. They are sources of water and fish, and provide a wealth of non-timber forest products (NTFPs). The importance of trapaengs, not just to biodiversity, but also to local communities, makes safeguarding these critical areas a clear conservation priority. Since April 2006, BirdLife Cambodia has been working with local communities to improve natural resource management. A network of community-based Site Support Groups (SSG) has been established, comprising local stakeholders with a common interest in protecting trapaengs. Local communities have agreed a Trapaeng Management Protocol, which prohibits damaging activities in the vicinity of the pools, such as the use of poisons to catch fish, tree felling and large-scale water extraction.

The greatest current threat to the area is posed by plans to grant a land concession for commodities such as teak and sugar. However, over the long term, maintaining traditional ways of life, based around pastoral farming, will become increasingly challenging in the face of the area's economic development and the arrival of mechanised agriculture.

To read a more detailed account of this case study, visit the Satoyama website, an initiative that promotes and supports socio-ecological production landscapes.

Recommended Citation:
BirdLife International (2011) Traditional pastoralism is critical to the conservation of some of Asia's most threatened birds. Downloaded from http://www.birdlife.org on 03/10/2022