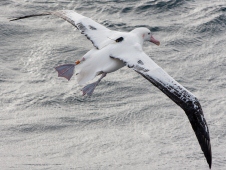 Technological advances have allowed remote tracking devices to be fitted to seabird species in order to study their movements whilst at-sea. BirdLife collates these data in an online database and uses them to better conserve seabirds around the world. 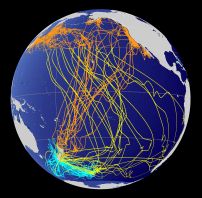 Several Sooty Shearwater were tracked from their colony on Mana Island, New Zealand. Devices recorded their location throughout the year and showed their migration across the entire Pacific from New Zealand to the Aleutian Islands, the California current and the Japanese coast. Colours represent the different times of year. Adapted from Shaffer et al. (2006).

Many seabird species, such as Wandering Albatross Diomedea exulans and Sooty Shearwater Puffinus griseus, spend most of their lives at sea. Many breed on islands and rocky outcrops in remote parts of the world, but during the rest of the year when between rearing chicks or when adolescent, these species are out in the open oceans. Whilst at sea they travel widely, often far from land, meaning that our knowledge of their distributions and behaviours during this time can be extremely poor.

Since the 1990s we have had the opportunity to study the movements of these species through the application of remote tracking devices. Advances in technology have produced satellite tags and geolocator devices (that estimate location on the earth based on sunrise and sunset times) that are small enough to be fitted to seabird species and collect data on their movements. Once devices are retrieved or, in the case of satellite tags, once they transmit their data to satellites, researchers are able to plot the latitude and longitude of the bird’s locations and better understand their distributions. Such information can indicate not only the distribution of tracked birds, but also their behaviour and the way in which they utilise their surrounding environment.

The insights from the first devices have encouraged a huge interest in this type of research (Tuck et al. 1999, Jouventin and Weimerskirch et al. 1990). As technology has improved, smaller, cheaper and more reliable devices have been developed that have allowed researchers to collect tracking data for a broad range of seabird species around the world.

In recognition of the promising application of these data to conservation science, BirdLife convened a workshop in 2004 for the seabird tracking research community to discuss setting up a database to collate these data in a coherent way. Data and research that were previously dispersed were brought together to allow an unprecedented understanding of the distributions of species throughout their various life history stages (BirdLife International 2004). As a result the attendees approved BirdLife’s investment in a platform to host these data and foster further collaboration within the community in the interests of seabird research and conservation.

Since that time, the database (www.seabirdtracking.org) has grown to include data for over 50 species of seabird, collected from around 100 breeding colonies and provided by more than 100 researchers. Collaborations fostered by the database have resulted in tens of research papers (e.g. Burger and Shaffer 2008, Grant et al. 2008). BirdLife has input ‘white papers’ exploring interactions between seabirds and fisheries to every Regional Tuna Fisheries Management Organisation, the results of which have played an important role in successfully lobbying for a change in fishing practices to minimise the risk of seabird bycatch in the South Atlantic, Indian, Western and Central Pacific Oceans (e.g. Small and Taylor 2009). BirdLife has also used the data to identify the first global network of marine Important Bird Areas (www.birdlife.org/datazone/marine), priority sites for the conservation and future survival of these species.

Fostering this collaborative approach and bringing together many datasets from various populations and life histories has meant it has been possible to gain a more complete understanding of how seabirds behave, move and migrate whilst at sea. This has been integral in developing our understanding of their ecology, how they interact with marine systems and in promoting protection for them from the various anthropogenic pressures that threaten many species with extinction.