Towards sustainable hunting in the Middle East 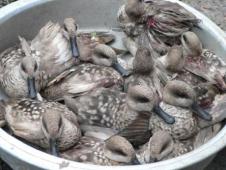 The Sustainable Hunting Project (2004–2007) was launched in response to the widespread and indiscriminate hunting of migratory birds in the Mediterranean countries of North Africa and the Middle East. The initiative has established a regionally coordinated and collaborative model for sustainable hunting that will hopefully ensure a safer journey for millions of migratory birds each year.

The Palaearctic–African flyway is the world’s largest avian migration system (Newton 2008). Each autumn, over two billion passerine and near-passerine birds, having bred in Europe and central and western Asia, migrate south to winter in tropical Africa (Hahn et al. 2009). During this southern passage and on their return journeys in spring, these birds encounter considerable hunting pressure. The death toll is staggering, with the number of migratory birds killed annually nearing 500 million. Many of these birds are shot and trapped in the countries of North Africa and the Middle East that border the Mediterranean. The region has a long history of bird hunting, with hundreds of thousands of people still involved in the activity today. Most of the hunting is recreational and both ‘sport hunting’ and falconry continue to grow in popularity. In Lebanon, for example, it is estimated that over 10% of the population regularly hunts; this compares with 6% in Finland, 3.4% in Ireland and 2.6% in France. The region is also a popular destination for ‘hunting tourists’, particularly from the Gulf States. In addition to direct mortality, hunting also poses a threat through disturbance and pollution. Lead shot, in particular, can present a serious environmental hazard, especially in wetland habitats. In Lebanon, 20–25 million cartridges are sold each year, equating to 640–800 tonnes of lead.

In order to address the unsustainable hunting of migratory birds in the region, BirdLife International launched a 3-year initiative in collaboration with national governments, hunting groups and conservation organisations. The focal countries for the project were Tunisia and Lebanon, with national coordination under the auspices of the Association "Les Amis des Oiseaux" (AAO; BirdLife in Tunisia) and the Society for the Protection of Nature (SPNL; BirdLife in the Lebanon). The project established a regionally coordinated and collaborative model for sustainable hunting with the following key outputs:

1.      Eight national reports were produced following a review of the current status of hunting in the region—covering the scale, impact, socio-economic and cultural importance and potential alternatives. In addition, seven regional synthesis reports were produced (in both English and Arabic) providing up-to-date information on a range of topics related to hunting in the region.

2.      A comprehensive set of regional guidelines (in English and Arabic) were developed through a consultative process, which culminated in a regional workshop. The guidelines provide a model for sustainable hunting and will act as a reference document for decision-makers across the region.

3.      A code of practice for responsible hunting of migratory birds was produced (in English, Arabic and French). It provides a practical guide to hunters and has been incorporated into the annual guide that is distributed to all licensed hunters in Tunisia.

4.      Educational materials and programmes, aimed primarily at school children (the next generation of hunters), were developed to improve awareness of the threats posed by unsustainable hunting to migratory birds.

5.      A review of hunting legislation and enforcement in Lebanon and Tunisia was carried out and a database of priority species and sites in need of legal protection was developed.

6.      A series of training workshops on conflict-resolution and consensus building were organized in order to foster lasting collaboration between hunters, governments and conservation groups.A regional action plan on sustainable hunting and conservation in the region was developed for the period 2008–2013.

Recommended Citation:
BirdLife International (2010) Towards sustainable hunting in the Middle East. Downloaded from http://www.birdlife.org on 07/02/2023