The largest wind farm in the world impacts birds of prey in California, USA 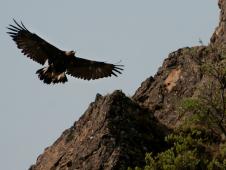 Construction of the world’s largest wind farm in central California, USA, has resulted in the deaths of numerous birds of prey, including Golden Eagles. As a result, ‘biodiversity retrofitting operations’ and on-going monitoring programs are being implemented.

Located in the foothills of the Coast Range Mountains in central California, USA, the Altamont Pass Wind Farm is the largest concentration of wind turbines in the world with a capacity of 576 megawatts (MW). The wind farm was built as a response to the energy crisis of the 1970s and, from 1981 to 1993, a total of 7,300 wind turbines were constructed over 150 km2. Numerous different types of turbines have been used over the years, with turbines typically being relatively small. As a result of repowering operations over the intervening years, the number of turbines has been reduced by about 2,000.

The area in which the wind farm is located is a much-used bird migration route. As a result of inappropriate placement and failure to integrate, or have knowledge of, the impacts on birds, large numbers of migratory birds are killed each year. The best estimates, corrected for scavenger removal rates, suggest 2,700 birds are killed through collisions annually, of which 1,100 are raptors, some of which are of national conservation importance (Smallwood and Thelander 2008). Of these deaths, approximately 348 are American Kestrels Falco sparverius, 188 Red-tailed Hawks Buteo jamaicensis and 67 are Golden Eagles Aquila chrysaetos.

An additional study on Golden Eagle found that the sub-adult and floater components of the Altamont Pass population are highly susceptible to collision with the wind turbines, and that this mortality prevented the maintenance of sufficient reserves of nonbreeding adults, suggesting that an eventual decline in the breeding population is possible (Hunt and Hunt 2006).Total deaths at the site over a 20 year period are estimated to be between 25,000 and 100,000 birds (Thelander and Smallwood 2007). As a result of the impacts on birds, mitigation actions have been put forward and are in operation, with on-going monitoring operations in place to investigate the results of these actions.

Recommended Citation:
BirdLife International (2013) The largest wind farm in the world impacts birds of prey in California, USA. Downloaded from http://www.birdlife.org on 24/01/2022