Threats to biodiversity have much deeper causes 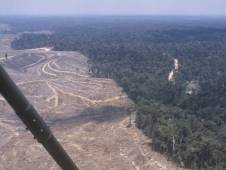 Biodiversity is vital for sustaining human life, and yet is still being lost. Why is this? Our economic systems fail to account for the enormous value of wild nature, which can be difficult to express in monetary terms. These systems therefore favour short-term gains from converting natural capital, without considering long-term costs. The problems are made worse by global imbalances in power and wealth, perverse incentives for the destruction of natural resources, and the rise in both human numbers and individual consumption.

Despite a growing awareness of the importance of natural world in sustaining human life, there is still a widespread reluctance, whether political, corporate or individual, to acknowledge the high value of biodiversity in the longer term. Instead, our economic systems almost invariably favour the short-term benefits to be had from conversion of natural capital into other forms of wealth. This is often further encouraged by government policies that introduce perverse incentives to continue with environmentally damaging activities such as over-fishing and wide-scale deforestation even when there is no rational economic justification for doing so (

). One reason for this is that we find it very difficult to agree on values for things that are neither bought nor sold, or whose benefits lie in the future. We therefore tend to base our decisions on things whose value in monetary terms we can calculate in a more straightforward way. We continue to do this even when we have good reason to believe that the value of these other assets is extremely high—a first attempt at valuing the goods and services derived from natural ecosystems carried out some years ago produced an estimate—US$33 trillion per year—of the same magnitude as the annual global gross national product (

Most of the world’s biodiversity—certainly when measured in terms of numbers of species—is found in developing countries. These countries therefore have a special responsibility for maintaining global biodiversity (

). However, imbalances in global trade arrangements and technology access make conservation challenging for them, as do a range of severe social pressures including widespread poverty. Often, areas with rich and irreplaceable biodiversity have particularly dense human populations (

), increasing the immediate pressures. For developing countries short-term measures for rapid economic growth are generally more expedient than long-term solutions. Imposition of structural adjustment programmes as a condition of international financial assistance has led in many cases to a reduction in government budgets, often decreasing the ability to enforce environmental laws. Many developing countries have also had to liberalise and deregulate their markets, increase the production of agricultural commodities for export, and allow increased foreign investment and control of natural resources. All of these have encouraged the rapid liquidation of natural capital and have eroded the legislative basis, managerial and financial capacity and political will for biodiversity conservation.

Poverty and inequality undermine sustainable use of natural resources

Poverty is a major driver of biodiversity loss. Poor people often depend directly on natural resources, but are often forced for survival to use them unsustainably. They may have little voice in decision-making, and are often displaced or dispossessed by skewed power structures, political instability or armed conflicts. Under such circumstances, they have no choice but to use what marginal resources remain often in areas that may be notionally set aside for biodiversity protection. National governments are faced with the challenge of addressing the poverty and inequality that continue to afflict millions of people. The usual strategy is to encourage centralisation, urbanisation and the development of infrastructure. Such responses can be effective, but at a long-term cost to society and the environment if poorly planned.