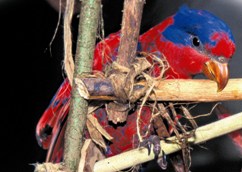 Unsustainable hunting for food or sport and trapping for the cage-bird trade has been implicated in the extinction of many bird species, and remains a significant threat today. Overexploitation particularly affects some bird families, including parrots, pigeons and pheasants, and is most prevalent in Asia. Many internationally traded birds continue to deteriorate in status, with illegal trade a contributory factor.

Hunting has been implicated as a factor in the extinction of at least 50 bird species in the past 500 years, including the Great Auk (extinct ca 1852) and the Carolina Parakeet (extinct 1915). Currently, hunting for food and trapping for the cage-bird trade have been identified as threats for over 400 globally threatened birds—a third of the total. Overexploitation particularly affects some bird families, including parrots, pigeons and pheasants (

). For some species that are especially highly sought after, overexploitation is causing dramatic declines in both numbers and range, and is known to be the most significant threat to them (

). Red List Indices for utilised birds show that species continue to deteriorate in status owing in part to unsustainable exploitation (

Many internationally traded birds continue to deteriorate in status

More than 30% of all bird species (3,337 species) have been recorded in the international pet trade. Unsustainable exploitation has contributed to an overall increase in risk of extinction for these species, although other factors, especially those resulting in habitat loss and degradation, are more important (

Illegal trade is an issue in some countries

Large numbers of birds are illegally caught and traded every year despite national laws and international trade agreements. In Latin America, recent studies have shown that high levels of exploitation are causing local population declines and threaten many species of parrots (

). In Europe, large numbers of songbirds are smuggled into Italy and Malta from South-east and central Europe to be consumed as a delicacy. This criminal trade is estimated to be worth EUR10 million per year (