Infrastructure development is a growing problem 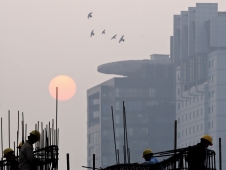 Our ever-spreading infrastructure of housing, industry, water, energy and transport networks is destroying and degrading natural habitats. Expansion and upgrading of infrastructure facilitate the spread of other activities, such as agriculture and logging, which can themselves be damaging unless properly managed. Artificial structures of many kinds also pose a direct threat to birds, particularly those on migration.

The expansion of the human-built environment into the natural one—infrastructure development—has a significant impact on biodiversity, mainly through the destruction, degradation and fragmentation of natural habitats. It has been identified as a key threat to many bird species, with residential and commercial development posing a particular concern for globally threatened birds (

). The encroachment of development into coastal habitats is also becoming a major concern for wetland-dependent birds (

Energy production and mining is a threat in some areas

The global demand for energy and for minerals and metals is experiencing unprecedented growth. Consequently, extractive development is taking place in areas never before exploited, many of them important for biodiversity. The resulting impacts are wide-ranging: in some areas, high density oil and gas drilling fragments and disturbs natural habitats, in others mountain top removal for coal results in wholesale destruction (

). Offshore, there is the threat of marine pollution, and the potential impacts of wave and tidal energy devices on seabirds (

). The establishment of remote mines and their associated road networks can facilitate human migration and settlement, triggering habitat degradation, hunting, and further infrastructural development. While many energy and mining companies are developing planning approaches to avoid, mitigate, rehabilitate and even offset their unavoidable negative impacts, there are also many that do not have such policies, and governments do not always have the capacity or commitment to regulate their activities effectively (

Dams and barrages are an increasing threat

Dams, barrages, embankments, canals and other major hydro-engineering schemes may have serious impacts on river-basin ecosystems and their resident populations of birds and other organisms. Large dams in particular have had widespread negative impacts on biodiversity, and have disrupted many existing ecosystem services (

). Other infrastructures, including storm surge barriers, are also driving declines in waterbird populations (

Transport networks can have far-reaching impacts

Transport networks, including roads, railways, shipping lanes and flight paths, are proliferating worldwide. Transport networks can play a leading role in economic development, but poor planning can have far-reaching negative impacts on ecosystems, including destruction and fragmentation of habitats, spread of invasive alien species and direct mortality (

Artificial structures of all kinds, from fences to cell-phone masts, electric pylons and wind farms (

), pose a direct threat to many birds, particularly those in migration (

). Huge numbers of birds are killed or injured by collision with these structures. In the case of large birds an additional threat is electrocution on poorly designed power lines (

). Many casualties are of common species, but collisions and electrocutions also have significant impacts on threatened birds (

). Often, deaths could be avoided through better design (

) and the use of simple bird-protection devices.