Seabirds are in serious danger from fisheries bycatch 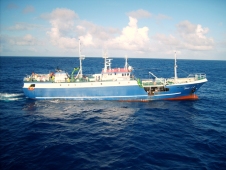 Global commercial fisheries have expanded dramatically since the 1960s, both in intensity and spread across the high seas. This is having direct and indirect impacts on birds worldwide as fishing pressure degrades the marine environment. Commercial longline, trawl and gillnet fisheries are responsible for the deaths of hundreds of thousands of seabirds each year, threatening the survival of a number of species, especially albatrosses. Shellfisheries also severely impact populations of migratory waterbirds.

Longline fishing is a particular threat to albatrosses

Since its rapid expansion in the 1980s and 1990s, longline fishing has become a key threat to many seabird species. Longline fleets—which in total set more than one billion hooks each year—concentrate in areas rich in fisheries resources. Unsurprisingly, these are also favoured foraging areas for seabirds (

). Every year up to 300,000 seabirds, including 100,000 albatrosses, are killed behind longline vessels as they scavenge for bait and offal and are accidentally caught on the fishhooks and drowned. This form of bycatch is now the single greatest threat to albatrosses. All 22 albatross species are classed as globally threatened or Near Threatened.

Recent research in the south-west Atlantic, South Africa and New Zealand indicates that trawl fisheries are also having a significant impact on albatrosses (

). Albatrosses and petrels are attracted to trawl vessels to feed on the fish waste thrown overboard during fish processing. Birds are killed when they are hit by the powerful cables that attach the trawl net to the vessel, and by being entangled by the net as they scavenge for fish.

'Fishing down the food web' means less food for seabirds

There is growing evidence that global overfishing of large predatory fish such as tuna, sharks, swordfish and cod, has grossly reduced their abundance. This, in turn, has shifted fishing pressure to smaller prey species, such as sandeels, anchovies and krill, creating a trend of ‘fishing down the food web’. This has major implications for the seabirds dependent on the small shoaling fish and potentially destabilises entire marine ecosystems (

). In the tropics, where foraging tuna drive small prey fish to the surface, providing brief windows of opportunity for plunge-diving species like boobies and terns, the overexploitation of tuna may be making foraging harder.

Despite a UN ban on their use in the high seas, commercial gillnet fisheries continue to operate in territorial and coastal waters around the world (as well as illegally in some international waters). They are responsible for the accidental entanglement of large numbers of pelagic birds (

), especially species that pursue fish underwater, such as divers (loons), grebes, seaducks, auks and cormorants. In Europe’s gillnet fisheries alone, an estimated 200,000 seabirds could be dying every year.

The unsustainable exploitation of shellfish can have a devastating impact on some bird populations. Migrant waterbirds require considerable food resources in order to survive their frequently epic journeys. Commercial shellfisheries negatively impact some species by reducing and altering their food supply at important wintering and staging sites (