Forest loss is one of the major threats to biodiversity 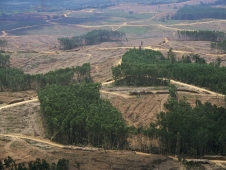 Nearly two-thirds of bird species are found in forests, mainly in the tropics, and many can live nowhere else. Yet more than one million hectares of tropical forest are destroyed each year, to make space for commodity crops and biofuels, and to produce paper and timber.  Selective logging degrades standing forests, bringing in its train disturbance, encroachment and increased hunting pressure. Deforestation also affects the world’s climate, accounting for about one fifth of all human-induced greenhouse gas emissions every year.

Many species depend on forests, which are being lost at an alarming rate

Much of the world’s biodiversity occurs in forests—nearly two-thirds of all bird species are found in them, mainly in the tropics, and many of these species are entirely dependent on forest ecosystems. Forest loss as a result of human actions poses a major threat to a substantial number of them. Forest loss is nothing new, but has accelerated dramatically in the past century, with some 130,000 square kilometres of forest cleared each year, of which around half is primary forest, most of it in the tropics. The vast majority of forest clearance is for conversion to agriculture or rangeland, although often this is preceded by commercial clear-cutting or selective logging for timber, especially in Asia (

), and any protected areas extremely vulnerable to logging encroachment within reserve boundaries (

The pulp, paper and oil palm industries continue to expand

The pulp and paper industry continues to expand in tropical Asia, with several huge mills operational or under construction in Sumatra, Borneo and Mindanao. Large areas of mature forest are being cleared for pulp fibre, and the land is then converted to other uses such as oil palm and rubber plantations (

). The demand for palm oil is increasing for use in foods and the growing biofuel market. Many forest birds, especially those with more small ranges or specialised feeding habits, are lost once forest is converted to plantation (

Selective logging for hardwoods affects vast areas of forest in the tropics. Such logging almost always causes significant damage to the forest ecosystem and affects populations of many bird species (

). When left alone, logged forests can generally recover, sometimes surprisingly quickly. In reality, however, logging is usually associated with other forms of disturbance, including encroachment and increased hunting pressure, which can have greater and more lasting impacts than the logging itself.

Deforestation accounts for about 20% of all human-induced greenhouse gas emissions every year, affecting the world’s climate and compromising biodiversity and livelihoods. Tropical forests play a crucial role in sequestering and storing (c.46% of the world’s living terrestrial) carbon, thereby reducing greenhouse gas emissions. Clearing forested land for oil palm to be used for so called 'carbon neutral' biofuels is thus a double jeopardy for biodiversity and the climate—it is estimated that it would take over 75 years for the carbon emissions saved through the use of such biofuel to compensate for the carbon lost through forest conversion (