Unsustainable agricultural practices are the greatest threats to bird species 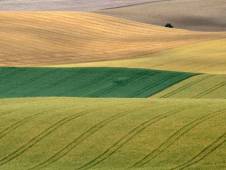 The expansion of agriculture, resulting in habitat destruction, is one of the greatest threats to the world’s remaining biodiversity—especially in tropical regions. Intensification of farming practices, leading to the degradation of agricultural and semi-natural habitats, is also causing declines in biodiversity across huge areas. Growing human populations, increasing demand for animal protein, and policies promoting biofuel production are the underlying causes for these trends.

The past three centuries have seen a six-fold expansion in the extent of cropland and pasture world-wide, thanks to exponential human population growth (

). Habitat loss as a result of this expansion is now threatening previously widespread and common birds (

). In Europe and North America, unchecked agricultural development has already transformed many natural habitats and depleted their biodiversity. Similar transformation is now underway in the tropics, where most of the world’s biodiversity is found, with huge implications for both wildlife populations and ecosystem functioning. Research shows that responses to land degradation such as afforestation may be more detrimental to ecosystem recovery.(

Demand for tropical commodities is a major cause of habitat loss

The cultivation of agricultural export commodities, notably coffee, cocoa, sugar and (more recently) palm oil and soya, has expanded rapidly within the developing world during the past half-century (

). Increased production of such commodities is causing unprecedented levels of habitat loss (

), particularly of tropical forests and grasslands, such as Brazil’s cerrado (

Agriculture for biofuels is a growing concern

Biofuels can be made from a wide range of plants and can produce lower greenhouse emissions than conventional fossil fuels. However, the enthusiasm for biofuels as a solution to climate change and energy security may be unfounded, given the associated risks of large-scale environmental destruction and increased emissions through conversion of natural and semi-natural habitats such as forests, peatlands and grasslands. In the European Union, the rush to grow biofuels by abolishing set-aside threatens farmland biodiversity already depleted as a result of the Common Agricultural Policy (

), while in the United States, the demand for corn ethanol adds further pressure to declining grassland birds in the Prairie Pothole Region (

). Biofuels may also destroy the livelihoods of local communities by threatening their food security and inflating food prices. Sugarcane plantations in Kenya’s Tana River Delta are just one example (

). As bioenergy demands grow, predictions show that European species are likely to be more strongly affected by bioenergy expansion than by climate change (

Agricultural intensification is a major threat to sites and habitats

As well as an increase in the area under agriculture, agricultural policies have led to intensification of farming in many countries, resulting in a decline in the ability of farmland to support a range of birds and other wildlife. Vast and highly managed monoculture landscapes have replaced diverse crop mosaics and valuable areas of semi-natural habitat have been lost from the farm landscape, including strips of meadow, hedgerows, groves, small wetlands and tree stands along wetlands. In Europe, nearly a third of identified Important Bird Areas are threatened by agricultural intensification (

), which is also implicated in the declines in a large number of common farmland birds (

). In the tropics similar processes are occurring with, for example, traditional shade coffee plantations being converted to 'full-sun' intensive systems, with significant impacts on birds and other wildlife (