Some sites are particularly important for birds and other wildlife 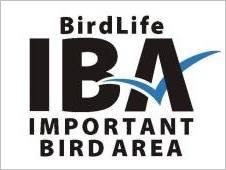 Sites of particular significance for birds have been identified by BirdLife as Important Bird Areas (IBAs). For many bird species, effective conservation depends on protecting networks of IBAs. These networks also capture much other biodiversity, so are an excellent first cut for the larger set of Key Biodiversity Areas—an extension of the IBA approach to other taxa. IBAs have been identified around the world, so far mainly on land and for freshwater, but increasingly attention is turning to the oceans.

Sites which are particularly significant for conserving birds across the world have been identified by BirdLife as ‘Important Bird Areas’. Some 10,000 such areas have been identified so far, in nearly 200 countries, through the application of a set of standardised selection criteria. This process has hitherto mostly focused on terrestrial and freshwater environments (

), but increasingly attention is turning to the oceans (

). Further tools are being developed with BirdLife partners in Africa to better conserve these 'Important Bird Areas' (

). However, protecting networks of IBAs is a very effective way of conserving a range of bird species with different ecologies and distributions.

Important Bird Area (IBA) networks often only cover a small fraction of the range of each species. However, because they concentrate on conserving key habitat for core populations of the species concerned, they can make a vital contribution to their conservation. Often, the whole of an IBA is composed of critical habitat for particular species. However, in areas where key habitat is fragmented the IBA may include both the habitat fragments and the surrounding matrix (

Networks of Important Bird Areas (IBAs) have been identified for many globally threatened birds (at risk because of their declining populations, small populations and/or small ranges (

), or limited to particular biomes (

). Among the highest priority IBAs are the Alliance for Zero Extinction sites (AZEs)—those holding the last populations of Critically Endangered or Endangered species (

). While many birds of conservation concern are largely sedentary, others are long-distance migrants that congregate at particular sites at different stages in their annual cycle. The IBA networks may protect breeding and non-breeding sites, as well as those along migration routes (

Important Bird Areas (IBAs) form part of a larger network of ‘Key Biodiversity Areas’—the most important sites for biodiversity conservation worldwide, identified on the basis of the species they contain (

). The conservation value of the IBA network for a number of other groups has already been shown, for example in East Africa (

). Where data on other groups are lacking, IBAs may therefore serve as a useful first cut for a network of Key Biodiversity Areas, with sites for other taxa being added once relevant information becomes available.