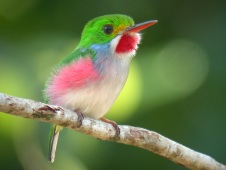 Birds comprise nearly 10,000 living species—the building blocks of biodiversity. Birds are found nearly everywhere, but each species is unique in its ecology and distribution. Many have small ranges and most are restricted to particular kinds of habitat. Taken together, they provide a picture of how biodiversity is distributed, and serve as valuable indicators for global environmental change.

There are an extraordinary variety of birds

One of the most fundamental aspects of biodiversity is species diversity. There are between one and two million named species, the vast majority invertebrate animals, and countless numbers un-named. Birds are one of the best known and most highly valued groups of species, comprising ten thousand different species, an extraordinary variety, from hummingbirds to ostriches, from penguins to eagles. New species continue to be discovered; demonstrating that we are still far from fully cataloguing the wealth of life on earth even within one of the most conspicuous and well-studied groups (

). Each species is unique, in its appearance, in its habits and in where it is found. Some occur in huge numbers and others are represented by a handful of individuals; some are sedentary, with individuals spending their entire lives in an area of a few hectares, while others undertake extraordinary annual migrations, covering literally half the world (

). Almost everywhere there are at least some kinds of bird—their ability to cross large expanses of open sea means that they have been able to colonise virtually all the world’s land surfaces, including the most isolated oceanic islands (

). They are absent as permanent residents only from the most inhospitable areas, and have even managed to penetrate deep into Antarctica, one of the most forbidding places on earth.

The number of different types of birds present, and exactly what they are, varies enormously from place to place. Globally, the most striking aspect of this is the far greater diversity of bird species in the tropics, compared with temperate or polar regions. Not only do there tend to be more species in any one place in the tropics than at higher latitudes, but tropical birds also tend to have smaller ranges so that the actual species found vary more from place to place. There are other patterns too: high rainfall areas tend to support more species than very dry ones while isolated areas, such as oceanic islands or individual mountain ranges, often have a high proportion of unique or endemic species, that is those that are found nowhere else. Among seabirds, the highest diversity and numbers of individuals is at mid-latitude in the southern hemisphere.

The degree of specialisation amongst birds varies greatly, but most species show a clear preference for one or more habitats, with forest being especially important (

). Indeed many species have their entire world distributions confined to a particular habitat within a single region or biome (

), mostly in a number of so-called ‘Endemic Bird Areas’ that together cover just 5% of the Earth’s land surface, mainly in the tropics and subtropics (

). In addition, roughly one in ten bird species, often those that range over extensive areas, congregate in large numbers at a few special sites at particular times (

Birds are valuable indicators for changes in biodiversity

Although many gaps remain, we know more about wild birds than we do about any other comparable group of organisms. They are easy to observe, being relatively big and conspicuous; most are active by day; they can be identified in the field, from a distance; and although they are diverse, the number of species is manageable (

). Because they are so well known and are found all over the world, taken together, birds can provide a picture of the way that much biodiversity is distributed across the world, and can serve as uniquely useful barometers for environmental changes (