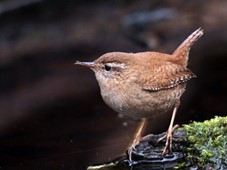 Across large parts of the world, natural woodlands are now highly fragmented and reduced in extent. Analyses of long-term data from the UK shows that the degree of isolation of patches and the area of woodland habitat influences sensitivity of woodland bird populations to the detrimental impacts of winter weather. These results support landscape-scale conservation efforts to increase the resilience of bird populations to climate change.

Efforts to facilitate species adaptation to climate change involve identifying the best management interventions to be implemented. One of two main approaches is site scale management, which aims to improve the resilience of populations through improving the quality or size of the site. The second is through landscape scale management, which aims to enable effective dispersal of individuals across landscapes through increasing site connectivity (Pearce-Higgins et al. 2011).

Species sensitivity to winter weather was not affected by site scale attributes, with landscape attributes such as level of isolation and extent of woodland habitat being more important. Generalist woodland species showed increasing impacts of cold winter weather at more isolated sites, with decreased population growth in cold winters at these sites. Woodland specialist populations were more likely to recover from a small population size (a conceivable result of extreme weather), at sites with greater woodland extent. Improved population recovery from larger woodlands may be expected due to larger sites supporting an increased number of recruits and attracting more colonists.

The resilience of some species to severe winters may therefore be improved by increasing landscape connectivity and increasing the extent of woodland cover across the countryside. In temperate regions, colder winters may increase in frequency with ongoing climate change (Liu et al. 2012), making these practises especially relevant. These are well established management actions for the persistence of biodiversity in general, but are likely to become increasingly important in light of climate change.