Widespread and substantial shifts are projected for Colombian bird communities 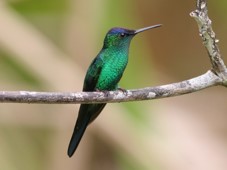 Bird community structure is projected to change dramatically in Colombia, with consequences for species interactions and ecosystem function. Some regions are expected to lose up to 84% of their current mean species richness, with the similarity of current richness and future richness projected to be as low as 30%. Such widespread and substantial shifts in bird communities will likely occur both within and beyond protected areas. 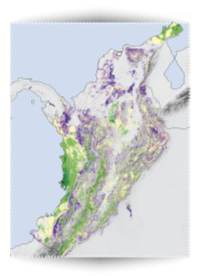 Species are expected to substantially shift their distributions in the coming decades; some are predicted to move out of protected areas, some to move in, some to expand their ranges and some to contract (Langham et al. 2015, Huntley et al. 2008, Hole et al. 2009, Barbet-Massin et al. 2009, Doswald et al. 2009, Huntley et al. 2012, Bagchi et al. 2013). Biodiversity hotspots may be particularly vulnerable to climate induced changes in avian composition as they consist of a large number of range restricted species in areas often threatened by land transformation and subsequent habitat loss.

The consequences of climate change on species range size, structure, species richness and composition was determined within Western Colombia, including two biodiversity hotspots, the Tropical Andes and Tumbes-Choco-Magdalena regions (Velasquez-Tibata et al. 2013). Distribution data for 146 species was obtained and the predicted change in distribution by 2050 determined using 15 bioclimatic variables.

More species are expected to lose range than gain and fragmentation of populations thought to increase, with the median change in range size being a decline of 33-43% and the distance between habitat patches to increase by 9-10%. Complete loss of suitable habitat within Colombia is predicted for 12% of species under some future scenarios, with 67% of these species also having no range outside of Colombia.

In terms of community level changes, mid-range elevations were predicted to experience the largest changes in species richness, with a decline of between 32-44%. Gains in species richness are expected in some regions, but these only result in net gains in the highlands of the East Andes. The similarity of current communities to future ones is predicted to be as low as 30% in some cases.

These changes in species richness are likely to have large implications for ecosystem functioning, with a whole host of new species interactions likely to occur as species are lost or gained from regions.