When planning for development does not integrate environmental issues, biodiversity suffers 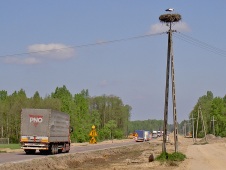 In Europe, EU Member States are required to both conserve the most important sites for birds and other biodiversity (the Natura 2000 network) and increase the capacity of their transport infrastructure. Numerous sites requiring protection under the Natura 2000 network, including many Important Bird Areas, could be potentially impacted by new transport developments. 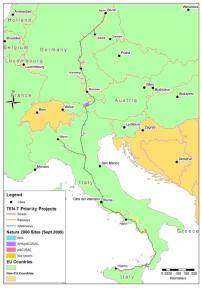 Member states of the European Union (EU) are obligated to conserve the most important sites for birds and other biodiversity within a network of protected areas, called Natura 2000. Comprised of Special Protection Areas (SPAs) designated under the EC Birds Directive and Sites of Community Importance (SCIs) identified under the EC Habitats Directive, the network is expected to cover more than 20% of the European Union when completed. However, countries are also required to increase the capacity of their transport infrastructure—roads, railways and waterways—to help achieve ‘universal mobility and accessibility’ (Fisher and Waliczky 2001). There is, therefore, considerable scope for conflict between the EU’s transport and nature policies.

The Trans-European Transport Network (TEN-T) is the European Union’s transport infrastructure framework. Initially adopted in 1990, it encompasses 30 ‘Priority Projects’ throughout Europe. By 2020, it is envisaged that the TEN-T will include 89,500 km of roads, 94,000 km of railways, 11,250 km of inland waterways, 210 inland ports, 294 seaports and 366 airports (European Communities 2005).

However, an analysis of 21 TEN-T Priority Projects conducted by the Royal Society for the Protection of Birds (RSPB; BirdLife in the UK) has found that as many as 379 SPAs (8% of the European total) and 935 SCIs (4.4% of the total) could be adversely affected by the projects (Byron and Arnold 2008). The analysis used GIS (Geographical Information System) to identify Natura 2000 sites falling within 2 or 5 km (conservative buffers) of the proposed projects. The 2 km buffer represents the area likely to be affected by direct impacts; the 5 km buffer, the area likely to be affected by indirect impacts. Then, the local knowledge of BirdLife Partners and other organisations was used to evaluate the extent to which these sites would be affected. For example, the Priority Project for the Danube waterway has been planned without proper environmental impact assessment or compliance with existing legislation and could impact 14 SPAs and 79 SCIs across Austria, Germany, Belgium, Hungary, Netherlands and Slovakia plus 62 Important Bird Areas (potential Natura 2000 sites) in Bulgaria and Romania. The Priority Projects are, however, only the tip of the ‘TEN-T iceberg’. Implementation of the whole TEN-T network could have even more severe impacts, both on individual sites and on the coherence of the Natura 2000 network.

If Europe is to lead the way in truly sustainable development, it is essential that EU transport and environment policies are joined up both politically and technically. To avoid potential impacts, transport planning must fully integrate Natura 2000 considerations as is required under European environmental law.

Recommended Citation:
BirdLife International (2010) When planning for development does not integrate environmental issues, biodiversity suffers. Downloaded from http://www.birdlife.org on 16/01/2022