Wetland conservation and environmental education in the heart of Harare 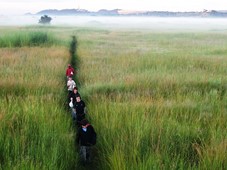 Wetlands are biodiverse ecosystems, providing key habitat for a diverse array of species and ecosystem services for local communities. Harare's wetlands are exceptionally rich in biodiversity with over 240 bird species recorded, including rare Striped Crake Amaurornis marginalis and Streaky-breasted Flufftail Sarothrura boehmi. These wetlands are threatened by urbanisation and agricultural expansion, making collaborative projects between communities, councils and NGOs key in ensuring their persistence.

Wetlands are one of the most productive ecosystems on earth, are biodiverse, and provide enormous value to people through ecosystem services (de Groot et al. 2012). At the beginning of the 21st Century, the Monavale Vlei wetland—a 40 hectare wetland that lies between the Monavale and Meyrick Park residential suburbs of Zimbabwe’s capital city, Harare—seemed fated to be lost as the city expanded. Informal cultivation, dumping and poaching by Harare’s rapidly growing population had degraded much of the habitat. The plants and animals, which included over 200 bird species recorded over the previous 50 years, and large mammals such as Serval Felis serval and Reedbuck Redunca arundinum, were fast disappearing.

BirdLife Zimbabwe has been active at Monavale Vlei since 2001, at first working with an informal group of Monavale residents who wanted to conserve the wetland. In 2004, BirdLife Zimbabwe secured funding from the Aage V. Jensen Charity Foundation (AVJCF) with the intention of buying 10 hectares of the vlei for conservation and educational purposes. A year later, the Conservation Society of Monavale (COSMO), a Site Support Group affiliated to BirdLife Zimbabwe, was formally constituted.

A partnership was forged between COSMO, BirdLife Zimbabwe, Harare City Council, the Environmental Management Agency and others, to broaden the support base for environmental initiatives to protect the vlei and prevent further degradation. As early as 2005, COSMO was active at the national level, in Zimbabwe’s Save the Wetlands Task Force, and now sits on the National Wetland Committee, where it played a significant role in Zimbabwe’s accession to the Ramsar Convention.

COSMO’s work includes implementing the Monavale Vlei Biodiversity Project, the outcome of a workshop organised by BirdLife Zimbabwe in 2006. In February 2013, the Secretary General of the Ramsar Convention on Wetlands of International Importance visited Monavale Vlei. The Ramsar Convention came into force in Zimbabwe in May 2013, and the tiny urban wetland was one of the first sites to be designated, in illustrious company that includes the vast Driefontein Grasslands and the Victoria Falls National Park. Monavale Vlei has also been nominated a UNESCO Biosphere Reserve, the first in an urban area in Southern Africa.

Although it has proved impossible to purchase Monavale Vlei as originally planned, BirdLife Zimbabwe and COSMO have been able to use the support from the AVJCF to help ensure the protection of this precious wetland site.

With a success story at Monavale Vlei, this approach is hoped to be replicated at other regions of the wetlands with the next candidate being Marlborough Vlei. Marlborough Vlei, a wet grassland with a rich diversity of flora and fauna, is threatened by cultivation, sewer overflow, and dumping. As a response, the local residents formed a Residents Association which contributes to benefits of creating space for recreation and education of ecology, natural history and nature conservation, assistance in flood prevention and clean water supply to the city of Harare.

To raise awareness, AVJCF together with BirdLife and its partners in Zimbabwe (BirdLife Zimbabwe (BLZ) and the Conservation Society of Monaval (COSMO) organise school days, and community engagement events  (e.g. Wetland World Day) to educate local people and to demonstrate the true value of these wetlands to the Harare's population.

Protecting Harare’s wetland ecosystems for nature and the city’s people
World Wetlands Day Celebrations at Marlborough Vlei in Harare, Zimbabwe
Where does Harare's water come from?

Recommended Citation:
BirdLife International (2015) Wetland conservation and environmental education in the heart of Harare. Downloaded from http://www.birdlife.org on 29/01/2023