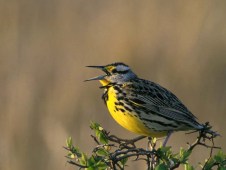 Some of North America’s fastest declining birds are grassland species whose habitat has been damaged by agricultural expansion and intensification. The US Conservation Reserve Program provides a lifeline for millions of the remaining birds by paying farmers to leave some land out of production, but this lifeline could be cut if the government’s promotion of biofuels leads to these areas being converted to produce corn.

US Government policies promoting biofuels, including a target of reducing 20% of gasoline use by 2017 mainly through the use of corn ethanol in fuels, have contributed to the increase in global corn prices and a decrease in US corn exports (Searchinger et al. 2008). Growing intensive corn crops has directly impacted wildlife in the US, but has also indirectly caused food crops that would have been grown in the US to be displaced to other countries, causing biodiversity declines abroad.

In the US, millions of ducks and other birds live on grass-covered wetlands that are kept idle from cultivation by the Conservation Reserve Program (Westcott 2007). However, ethanol production from corn is being promoted by the US Government and the Department of Agriculture is considering allowing landowners currently enrolled in this programme to terminate their contracts early for the stated purpose of ‘providing more acreage to meet the demand for corn’ (Ducks Unlimited 2007).

A study has shown that, without the Conservation Reserve Program land in the Prairie Pothole Region of North Dakota and South Dakota, there would be approximately 1.8 million fewer Sedge Wren Cistothorus platensis, Grasshopper Sparrow Ammodramus savannarum, Dickcissel Spiza americana, Bobolink Dolichonyx oryzivorus and Western Meadowlark Sturnella neglecta. This would lead to decreases in their populations of up to 52%, depending on the species (Niemuth et al. 2007).

Across North America as a whole, based on the results of the Breeding Bird Survey, some of these species have already undergone large declines over the last 40 years (Butcher and Niven 2007). Grasshopper Sparrow is the tenth fastest declining common bird species in the continent, having declined by 65% since 1966. Over the same period, Western Meadowlark and Bobolink both declined by 51%. This highlights the importance of the Conservation Reserve Program, and the risk of undermining it by converting such areas to producing corn for ethanol.

Furthermore, the indirect effects of corn-based fuels are being felt in Brazil. The shift from soybean to corn production in the US has been proposed as one of the reasons for the recent surge in soya bean expansion in Brazil, leading to slash-and-burn practices and forest destruction in the Amazon, especially in the main soy-producing states of Para and Mato Grosso (Butler 2007).