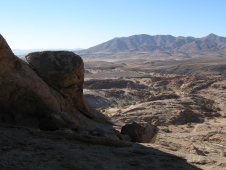 The central Namib desert in Namibia is experiencing a “uranium rush”, due to the dramatic increase in value of this energy commodity. To date, the rapid development of this region is happening without the benefit of strategic planning, in terms of balancing biodiversity conservation and tourism, coordinated infrastructure development to serve these mine developments, and sustainable water management in a hyper-arid environment. BirdLife International has participated in a process to encourage the development and implementation of a Strategic Environmental Assessment for the region.

The central Namib desert in Namibia is experiencing a “uranium rush”, due to the dramatic increase in value of this energy commodity in recent years, triggered by a global perceived need for second generation nuclear power plants and energy provision independent of fossil fuels. The Central Namib is well endowed with a geological legacy of alluvial uranium deposits and solid rock ore bodies. This, together with Namibia’s established role and experience in the uranium mining industry, is attracting concentrated exploration and mine development activities, clustered within and to the north of the Namib-Naukluft National Park, an Important Bird Area.

One of the largest protected areas in Africa, the Namib-Naukluft National Park supports a high level of endemism for flora and fauna, as well as supporting significant populations of mammals adapted to a hyper-arid environment, such as Southern Oryx Oryx gazella, Springbok Antidorcas marsupialisand the globally threatened Mountain Zebra Equus zebra hartmannae. Such ungulate populations in turn support one of the largest breeding populations of the globally threatened Lappet-faced Vulture Torgos tracheliotus in southern Africa. The park contains extremely diverse desert habitats, extensive gravel plains and mountain and canyon habitats. Endemic birds associated with the park include Ruppell’s Korhaan Eupodotis rueppellii, Dune Lark Certhilauda erythrochlamys (much of its entire distribution lies within the protected area), Gray’s Lark Ammomanes grayi, and Herero Chat Namibornis herero. Other species of interest are Ostrich Struthio camelus and Ludwig’s Bustard Neotis ludwigii and a wide variety of raptor species.

Of 78 exploration licences targeting uranium in the region, 66 have already been granted and 12 are pending. At least eleven of these occur within the Namib-Naukluft National Park, whilst another 13 occur in other National Parks and protected areas. The sensitive ecology and landscape of this much visited and appreciated part of the Namib Desert underpins a major tourist attraction which can easily be compromised by an increase in mine infrastructure. In addition, increased urban development associated with the main coastal settlements is already putting pressure on the coastal Walvis-Swakopmund IBA and Walvis Bay IBA (a Ramsar site). A significant increase in mining development in the region will invariably increase the pressure for residential and infrastructural development along the coast, with potential impacts on the near-threatened Damara Tern Sterna balaenarum breeding sites and the globally significant numbers of migratory shorebirds and flamingos using such sites. However, such issues and National Park status are not deterring the government from seeking to realise significant economic benefit from mineral resources.

While the Namibian government has recently signed into statute the Environmental Assessment and Management Act 2008 (pending promulgation), requiring higher standards of Environmental Impact Assessment (EIA) for individual mining projects, such legislation still cannot address the cumulative impacts incurred by regional development on the scale envisaged. In the past, such EIAs have proved to be weak or inadequate, with considerable gaps in relevant baseline data. For a region that is experiencing such development, there is clearly a case for a Strategic Environmental Assessment (SEA). Such an exercise would collate all the baseline data for biodiversity and physical resources (water, existing infrastructure), identify gaps, key sensitive areas and resource constraints and make recommendations for impact avoidance, mitigation and appropriate rehabilitation. Such a study would also assess the social impacts of such regional-scale mining development. This process extends the aims and principles of EIA upstream in the decision making process, beyond the project level and when major alternatives are still open (UNEP 2002).

With such concerns in mind, BirdLife International has worked with the Chamber of Mines of Namibia to consider how such an SEA could be drawn up through a process of wide stakeholder participation, in order to address the rapid growth of the uranium mining industry. The development of the SEA (and the Strategic Environmental Management Plan that will result) is now being led by Ministry of Mining and Energy and key individuals from various institutions (Ministry of Environment and Tourism, Ministry of Finance, Department of Water Affairs, Namwater, Nampower, etc.)  have been invited to participate. In the face of unprecedented and uncoordinated development pressure on the central Namib ecosystems, landscapes and its protected areas, this inclusive approach promises to deliver an outcome that has the best chance of minimising negative impacts while facilitating Namibia’s imperative for economic development.