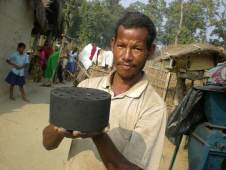 Man with charcoal briquette made from invasive plants © B. Pandeya

The wetland ecosystem at Koshi Tappu in Nepal is critically important, not just for wildlife, but also for the 100,000 people who inhabit the reserve’s buffer zone. As part of a three year project, Bird Conservation Nepal and conservationists from the UK worked alongside these communities to promote sustainable livelihoods—alleviating the pressure on wetland resources and providing tangible benefits to some of the region’s most disadvantaged people.

Koshi Tappu Wildlife Reserve, an Important Bird Area (IBA) and Ramsar site in the Terai of south-east Nepal, is by far the most significant wetland staging post for migratory waders and waterfowl in Nepal. A mosaic of open water, riverine habitats and seasonally flooded grasslands, it supports tens of thousands of waterbirds and many globally threatened bird species including Bristled Grassbird Chaetornis striatus (VU) and Swamp Francolin Francolinus gularis (VU). The reserve is also important for non-avian wildlife, such as South Asian river dolphin Platanista gangetica (EN) and is home to Nepal's last population of Asian buffalo Bubalus arnee (EN).

Since the 1990s the number of waterbirds visiting the reserve has dropped dramatically. The reserve is subject to intense pressure from neighbouring communities who depend on the area for fishing, livestock grazing, firewood collection and the harvesting of natural products. Historically, the relationship between local people and the reserve has been poor. For marginalised and disadvantaged communities the reserve regulations can seem oppressive—denying them access to much-needed resources and livelihood options. However, the apparent incompatibilities of wildlife conservation and the needs of local people belie the fact that both depend on healthy, intact ecosystems. The long-term future of communities around Koshi Tappu depends on developing sustainable livelihood options that can deliver material benefits to local people whilst preserving the ecological integrity of the wetlands.

To achieve this, Bird Conservation Nepal (BCN; BirdLife in Nepal), in collaboration with the Wildfowl and Wetlands Trust (WWT), began a three year project entitled ‘sustainable wetland management for wildlife and people in the buffer zone of Koshi Tappu Wildlife Reserve’. The project, funded by UK government's Darwin Initiative, identified a number of innovative livelihood options that offered sustainable alternatives to damaging forms of resource use.

One of the main focus activities was to deal with the problem of invasive species within the reserve. Koshi Tappu along with several of Nepal’s other IBAs are suffering from the spread of invasive plants such as Water Hyacinth Eichhornia crassipes and Mikania micrantha. Water Hyacinth has a devastating effect on key habitats for biodiversity: rapidly choking slow-flowing water bodies; overrunning fishponds, clogging irrigation systems and causing flooding. Although Water Hyacinth can be readily controlled through manual clearance, local communities have lacked sufficient incentives and resources to keep up the activity. In response, the project team pioneered the use of the hyacinth to produce compost fertilizer. This provided local people with a cheap and safe alternative to chemical fertilizers while at the same time creating an incentive to control this invasive plant. Using Water Hyacinth to make compost reduces the need to purchase chemical fertilisers.

As an alternative to collecting firewood from within the reserve, the buffer zone communities were shown how to make charcoal briquettes from the invasive plants Ipomoea and Lantana. Not only are the production costs lower than the cost of buying firewood, but it also provides a incentive to harvest non-native plant species that are damaging the wetland ecosystem. These provide a smokeless fuel which is more efficient and cheaper than firewood, and reduces demand for animal manure for fuel (thus increasing the amount available as fertiliser on farmland).

The project has succeeded in delivering tangible benefits to the buffer zone communities, has improved local attitudes to wildlife conservation by demonstrating the importance of maintaining biodiverse ecosystems and is having a positive effect on the wetland habitats that are so important to birds and other wildlife in this reserve.