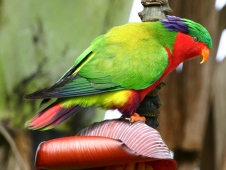 The Endangered Rimatara Lorikeet was until recently confined to the tiny (9 km2) island of Rimatara in French Polynesia, plus two sites in the northern Line Islands of Kiribati, where the species had been introduced in historical times. In 2007, 27 birds were translocated to Atiu in the Cook Islands following an absence of almost two centuries. The translocation was the culmination of many years of painstaking work by local conservationists, and hopefully marks the beginning of a more secure future for one of the world’s rarest parrots.

In 2007, a group of Endangered Rimatara Lorikeets Vini kuhlii were released on Atiu in the Cook Islands following an absence of almost two centuries. The successful transfer of the birds from Rimatara, in French Polynesia, to their new home was the culmination of many years of painstaking work by local conservationists, and hopefully marks the beginning of a more secure future for one of the world’s rarest parrots.

Prior to the successful translocation to Atiu, this striking parrot was only found on Rimatara and at two sites in the northern Line Islands of Kiribati, where the species had been introduced in historical times. However, fossil records and oral traditions indicate that the lorikeet was once present throughout the Cook Islands archipelago as well. Unfortunately, by the 1920s, it had been driven to extinction in these areas; exploited for its highly-prized feathers, which were used to decorate ceremonial headdresses and attire. A similar fate was only avoided on Rimatara thanks to a hundred year old taboo, imposed by the island’s queen, which forbade hunting of the species.

Today, the greatest threat facing the Rimatara population is the arrival of black rat Rattus rattus. Nest predation by the rodent has already caused dramatic declines in the two other endemic lorikeets in French Polynesia and the Cook Islands: Blue Lorikeet Vini peruviana and Ultramarine Lorikeet Vini ultramarina. Confined to an island only 9 km², Rimatara’s lorikeets could easily be decimated by just a handful of black rats. With Pacific rat Rattus exulans and Norway rat Rattus norvegicus already abundant on the island, conservationists feared that the eventual arrival of black rat was inevitable. Consequently, in 1992, the Cook Islands Natural Heritage Trust (CINHT) took the decision to establish a reserve population within the southern Cook Islands. Fieldwork quickly established that the only inhabited islands in the southern Cook Islands free of black rat were Atiu and Aitutaki. Of these Aitutaki was deemed unsuitable owing to the presence of Blue Lorikeet, which would likely compete with the reintroduced birds. Therefore, Atiu was chosen as the site for the translocation programme.

It took 15 years of painstaking work to secure the support of local communities, traditional island chiefs and the relevant government agencies in French Polynesia and the Cook Islands. However, by 2005, the necessary agreements were in place, and BirdLife International added the translocation project to its 'Saving the Pacific's Parrots' programme funded through the 2006 British Birdwatching Fair. In April 2007, a team of local conservationists, assisted by staff from San Diego Zoo, succeeded in capturing a number of lorikeets on Rimatara. In total, 27 birds made the journey to their new home on Atiu where it is hoped that they will form the nucleus of a thriving population.