Tracking the impacts of climate change on European birds 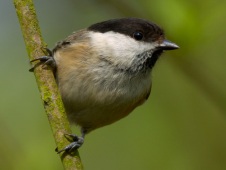 Willow Tit —one of the species projected to decline across Europe, © Sue Tranter (rspb-images.com)

The world’s first indicator of climate change impacts on wildlife at a continental scale has revealed a clear response by Europe’s bird populations to climate change. Species projected to benefit from climate change have increased in abundance since the mid-1980s, while those projected to undergo range reductions have decreased. Importantly, there are three times more birds that are negatively impacted by climate change than are positively affected. The Climatic Impact Indicator which integrates these effects is likely to become an important tool for tracking biological responses to climate change in the region. Recent results for North America are similar. 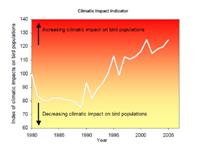 There is already considerable evidence to suggest that climate change is driving changes in the phenology, distribution and abundance of certain European birds (Huntley et al. 2008, Møller et al. 2008). Recently, scientists have developed a biological indicator that clearly demonstrates that many bird species across Europe have been affected by climate warming and that, for the majority of these species, the impacts have been negative (Gregory et al. 2009).

The indicator utilises climatic envelope model projections of future geographical range changes and population trend data from the Pan-European Common Bird Monitoring Scheme (PECBMS). Population data for 122 common European landbirds across 20 countries from 1980 to 2005 were combined with a model projection of change in the species’ potential range extent by the century’s end (2070–2099). The researchers divided the species into those with geographic ranges that are predicted to increase or decrease. The Climatic Impact Indicator (CII) is based on the divergence between the population trends of these two groups. During the 1980s, the CII declined in line with a period of successive cold winters (see figure). However, from approximately 1986 onwards, the CII has increased dramatically, in accordance with the model predictions and coinciding with a period of rapid climate warming across Europe. Most importantly, in the subset of European birds studied, it appears that 75% may have already been negatively impacted by climatic change.

The CII suggests that climatic change could dramatically alter species composition across Europe. The ecological consequences of such rapid changes in biological communities might have profound implications for ecosystem function and resilience. The CII has already been adopted by the European Commission as part of a suite of indicators being used to assess progress towards halting biodiversity loss by 2010. Considerable scope exists to build on the CII—it can be readily extended to incorporate additional countries as new bird monitoring schemes are established, while additional indicators can be created for specific bird groups or individual countries.

75% of common European birds at risk from climate change