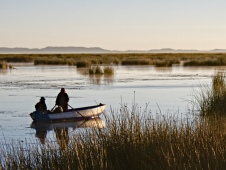 Titicaca Grebe was a common species a couple of decades ago. However, the use of monofilament gill nets by local fisherman on Lake Titicaca since 1980 is causing rapid declines estimated at about 75% over ten years. The population is small enough that, if these declines continue, this species may qualify as Critically Endangered on the IUCN Red List, meaning that it is on the edge of extinction.

Titicaca Grebe Rollandia microptera was classified as Least Concern until 2002, when it was reclassified as Endangered due to an overall population decline of c.75% over the previous 10 years (BirdLife International 2008). This species is endemic to open, freshwater lakes on the altiplano of Peru and Bolivia and was estimated to have a total population of 1,600 individuals in 2003. The population of Lake Umayo, Peru, crashed from 1,147 birds in 1986 to just 4 in 2001 (Fjeldså 2004), and the main population on Lake Titicaca, Bolivia, declined by 15% between 2003 and 2005 (Asociación Armonía 2007).

The principal driver of this decline is the use of monofilament gill nets by local fishermen since 1980 (Fjeldså 2004, Martinez et al. 2006). The nets are set in the shallows near the tule—beds in which the grebes breed to catch Orestias fish. Birds become entangled and die as by-catch in the nets: of 20 fishermen interviewed, 90% confirmed that Titicaca Grebes were caught in their nets on a weekly or monthly basis (Martinez et al. 2006). Over-harvesting of fish stocks in Lake Titicaca is reducing food availability, which is believed to be contributing to the decline (Asociación Armonía 2007). Other factors, including the loss of tule-beds to cattle feed, harvesting of eggs by local fishermen, and subsistence hunting by the Uro communities are also having a detrimental impact on the population of the Titicaca Grebe (Martinez et al. 2006). If the decline continues at the current rate, the species is likely to be re-classified as Critically Endangered in the near future (BirdLife International 2008), reflecting the serious risk of its extinction.

Recommended Citation:
BirdLife International (2008) Titicaca Grebe is being driven rapidly towards extinction owing to the unregulated use of gill nets. Downloaded from http://www.birdlife.org on 02/02/2023

Key message: Declines can be quick and catastrophic
Case studies