Those who benefit from biodiversity conservation should pay the costs 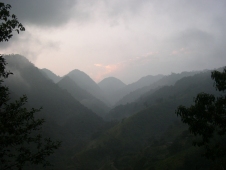 In developing countries, local communities generally pay little of the ‘active’ costs of conservation, but most of the ‘passive’ costs, such as benefits foregone through lost opportunities for conversion or exploitation. Thus the costs of conservation must be met by payments from the national and global beneficiaries for the continued delivery of biodiversity goods and services.

Rough representation of the relative costs and benefits of conserving biodiversity (e.g. at a particular Important Bird Area) at the local, national and global scales 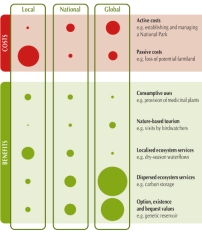 A perennial problem in biodiversity conservation has been inadequate information on costs and benefits, and the scale at which these apply. Analyses are beginning to get to grips with this problem, at least at a conceptual level (Balmford and Whitten 2003). In developing countries, local communities generally pay little of the ‘active’ costs of conservation—for example, the budget for managing a national park. But although these communities are often impoverished, they pay most of the ‘passive’ costs, such as benefits foregone through lost opportunities for conversion or exploitation (see figure). These costs, although rarely taken into account, can be very substantial. They are one reason why it is often so difficult to make ‘conservation and development’ projects work. Such projects usually try to offset such costs through new income generating schemes, for instance marketing sustainably-harvested forest products, bee-keeping or nature-based tourism. While there are successful examples of this approach, it is hard to apply where the local benefits (even including those from localised ecological services) are substantially less than those offered by land conversion.

The difficulty is that the biggest benefits are often enjoyed at distances remote from the conserved area—at the national and global scales. These benefits are also very hard to quantify in monetary terms. They include the role of natural habitats in carbon storage and climate regulation. They also include the possibility of use in the future (option values), the value of a habitat or species still existing (existence values) and the chance to pass on benefits to future generations (bequest values). These services and values accrue at a larger scale and to many more people than localised services. Their importance will grow as people become more numerous, more wealthy and more aware of their natural heritage; and as natural habitats become more diminished, fragmented and threatened.

The implication of this analysis is that more of the costs of conservation to local communities must be met by payments from the national and global beneficiaries for the continued delivery of biodiversity goods and services. While such payments raise a number of difficulties, these appear to be soluble both in principle and in practice (Ferraro and Kiss 2002). By far the biggest obstacle is the lack of political or societal recognition, nationally and globally, that biodiversity conservation needs to be paid for and is a worthwhile, indeed essential, investment. While the principle of global payment for global goods is already enshrined in the Convention on Biological Diversity, developed countries have dismally failed to live up to their commitments.

Recommended Citation:
BirdLife International (2004) Those who benefit from biodiversity conservation should pay the costs. Downloaded from http://www.birdlife.org on 08/12/2022