The world's climate has changed significantly over recent decades, and larger changes are predicted 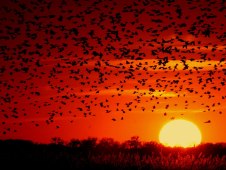 Our planet’s climate has changed significantly over recent decades, with temperature increases and associated shifts in precipitation patterns, snow cover and sea level rises. Most of the observed warming has been driven by greenhouse gas emissions resulting from human activities. These changes are projected to continue at an unprecedented rate.

There is convincing evidence that our planet’s climate has changed significantly over recent decades. Over the twentieth century the global mean surface temperature increased by 0.4–0.8ºC and sea-levels rose 1.2 mm annually. The largest temperature increases occurred across the mid- and high-latitudes of northern continents, where precipitation increased by 5–10%. Snow cover has decreased by 10% in the northern hemisphere since the late 1960s (Gitay et al. 2002).

Since the start of the industrial era, the atmospheric concentrations of greenhouse gases such as carbon dioxide and methane have increased due to human activities. For example, carbon dioxide concentrations have increased 31% since 1750, largely due to combustion of fossil fuels and deforestation. Most of the observed warming over the last 50 years, with associated precipitation changes and sea level rises, is likely to have been caused by the increase in greenhouse gas concentrations (Gitay et al. 2002, Houghton et al. 2001).

As a consequence of continuing human-induced changes to greenhouse gas concentrations, the planet’s mean surface temperature is projected to rise by between 1.4 and 5.8ºC by the end of the twenty-first century, with land areas warming more than the oceans, and high latitudes warming more than the tropics. Such rates are unprecedented during at least the last 10,000 years. The intensity and frequency of extreme climatic events are likely to increase. While annual precipitation is projected to increase overall (as a global average), particular regions will see increases or decreases of typically 5.2%. Broadly, precipitation is projected to increase at high-latitude and in equatorial areas and decrease in the subtropics. Sea levels are projected to rise 9.9 cm over the same period (Gitay et al. 2002).

Recommended Citation:
BirdLife International (2004) The world's climate has changed significantly over recent decades, and larger changes are predicted. Downloaded from http://www.birdlife.org on 07/07/2022